This movie resumes from exactly where Part One ends! Mr X walk in to discover innocent Karl over Ben’s knee getting his bare bottom spanked!

Mr x rescues young Karl and he is furious! Ben soon finds himself getting spanked again, this time bare bottom …… 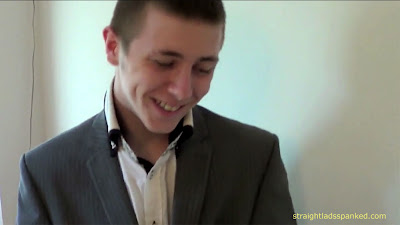 ….and with Karl watching and laughing.

Can the humiliation get any worse for this strapping football player?

Mr X decides that since Ben aggressively spanked Karl then it would only be fair that Karl gets revenge! Ben can’t bear it. He finds himself facing the ultimate humiliation as the older player lies over  Karl’s lap and gets his bare butt
spanked.

Much to Karl’s delight!!

Ben has never been so humiliated

Especially when Karl announces he plans to “Tell everyone” what happened

Ben will surely think twice before picking on the younger players again!

📂This entry was posted in humiliation Straight Lads Spanked

Having to take a bare-arse spanking from a younger guy must be as humiliating as it’s ever going to be. It will take bully-boy Ben some time to live it down – hope young Carl makes the most of it. LOL

Karl certainly intends to make the best of it, as he says to Ben, he plans to tell everyone! 🙂

Seeing Ben get his bare bottom, pants down spanking is such an exciting scenario. To me he looks like a glossy handsome young estate agent getting found out and then giving one of the most shaming punishments around !