The artist Copper continues with his exploration of the History of male on male Spanking videos with a second look at Studio 7 and one of its most controversial characters.

OK, class. I am glad to hear that a number of readers are enjoying our History Lessons. If any of of you remember Studio-7 videos, you will certainly recall Mike Pastori, one of their frequent models. Whether you liked him or hated him, he certainly made a mark on the spanking-video industry (as well as many-a-bottom) so here is a SPECIAL EXTRA CREDIT ASSIGNMENT to share a bit of his personal history.

At the height of their success in the mid-1990’s, Studio-7 introduced a new actor by the name of MIKE PASTORI (real name Thomas John Mitchell) who created a sensation with his extremely assertive demeanor and severe spanking technique that often resulted with tears and sobbing. His first video for the company was “You Spanked the President’s Son” (SV-41) and he soon became the resident sadist for Studio-7.

Over the next few years, Mike Pastori would go on to appear in 43 videos for Studio-7, including offerings like “Counselor Training” (SV-65) where he mentors a new employee in how to discipline by first spanking him, and then having him demonstrate what he just learned on a subordinate; “Cry Baby Cry” (SV-66) where a father repeatedly reduces his son to tears; and “The Interview with Peter Stone” (SV-80) featuring a strapping new lad who went on to appear in a half-dozen videos for the studio.

While still working for Studio-7, Mike Pastori founded his own company, MANic Productions, that allegedly included a working dungeon and offered male slaves for rent. Two of those “slaves” escaped and filed criminal complaints against Pastori that included kidnapping and slavery, claiming that they had not consented to his abuse. On November 27, 1996, Pastori’s dungeon was raided by the San Diego Police Department. Pastori was eventually charged with pimping and pandering, and with so much print and video evidence against him, Pastori plea-bargained the allegations down to “attempted pandering” and wound up serving two years in a California state prison.

In addition to his incarceration, Pastori was ordered to cease any involvement with the adult entertainment industry, and upon his release, he discovered that all of his computers and files had been confiscated by the court. Having lost all of his records and mailing lists and after a lifetime of being “in charge,” the prison term and loss of his livelihood weighed heavily on him and he died of a heart attack.

After Mike’s passing, Studio-7 offered a “Final Tribute” for his fans, by discounting his videos for a period of time. I am attaching a copy of that flyer, although you might notice that whoever typed it repeatedly misspelled his name “Pastoria”. Additionally I’m including several of the original catalog pages from his films, including his first video (please note that in the description, “Mike” is referring to a character’s name and not Pastori), as well as the first Peter Stone video, and one of his severe videos, “How to Break a Slave” that Studio-7 wasn’t even sure could be legally released. 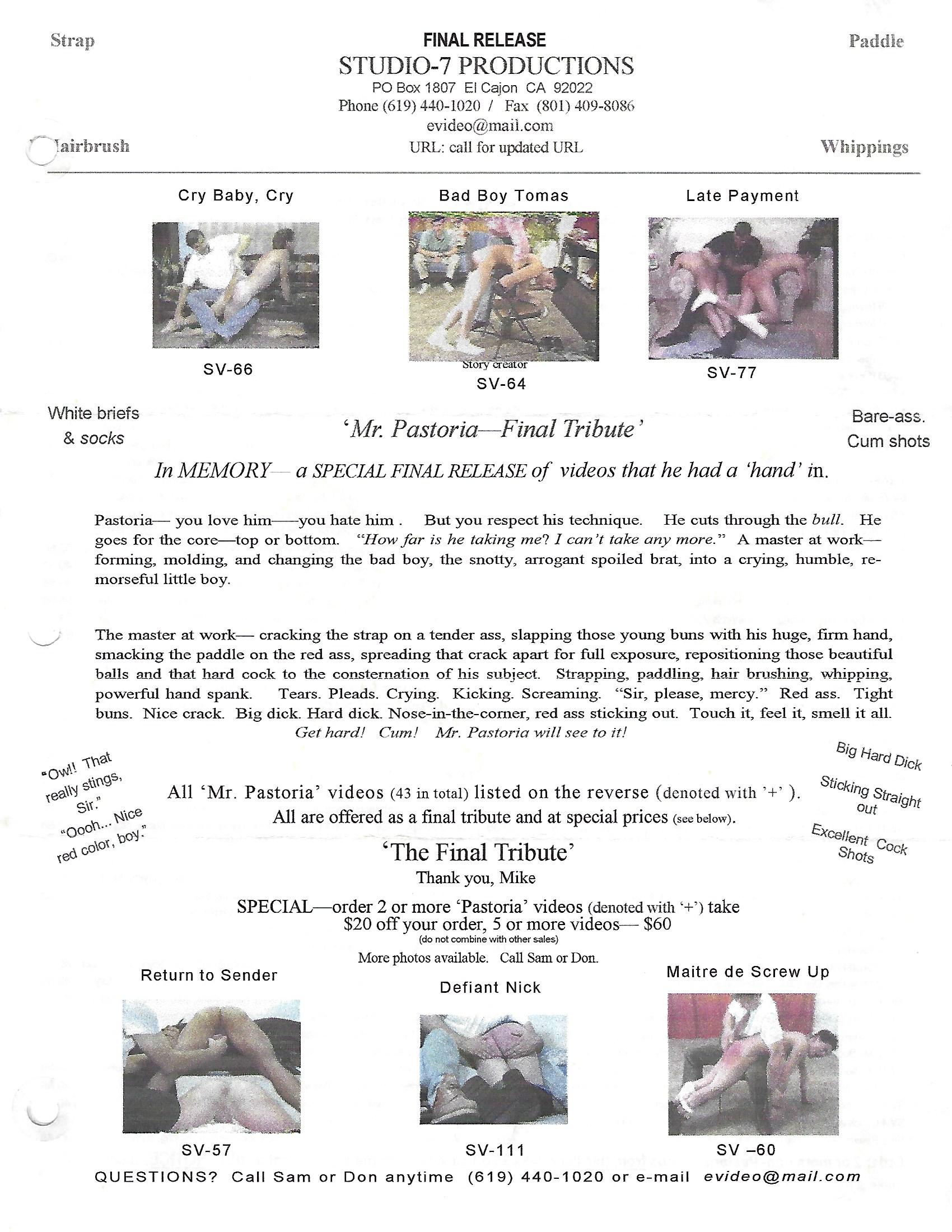 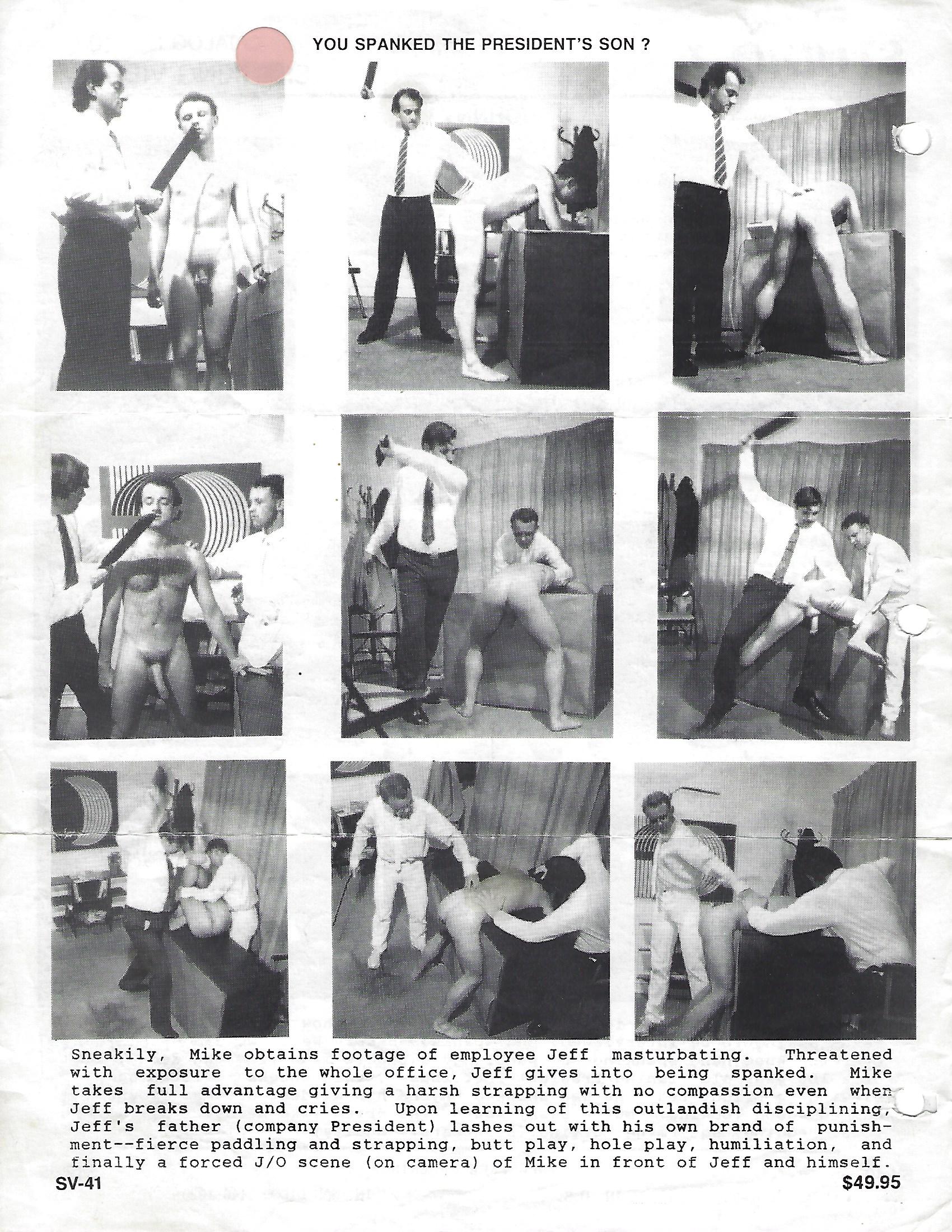 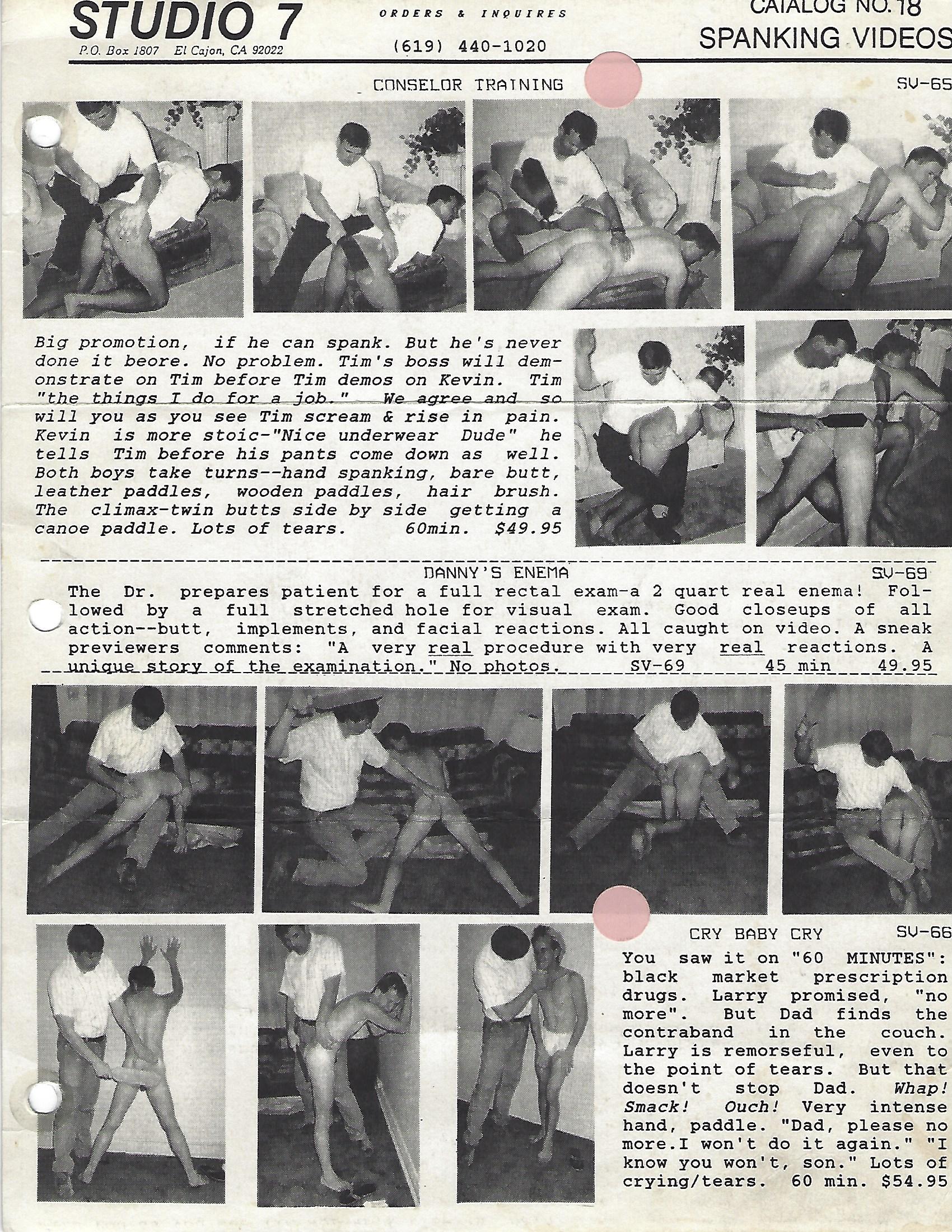 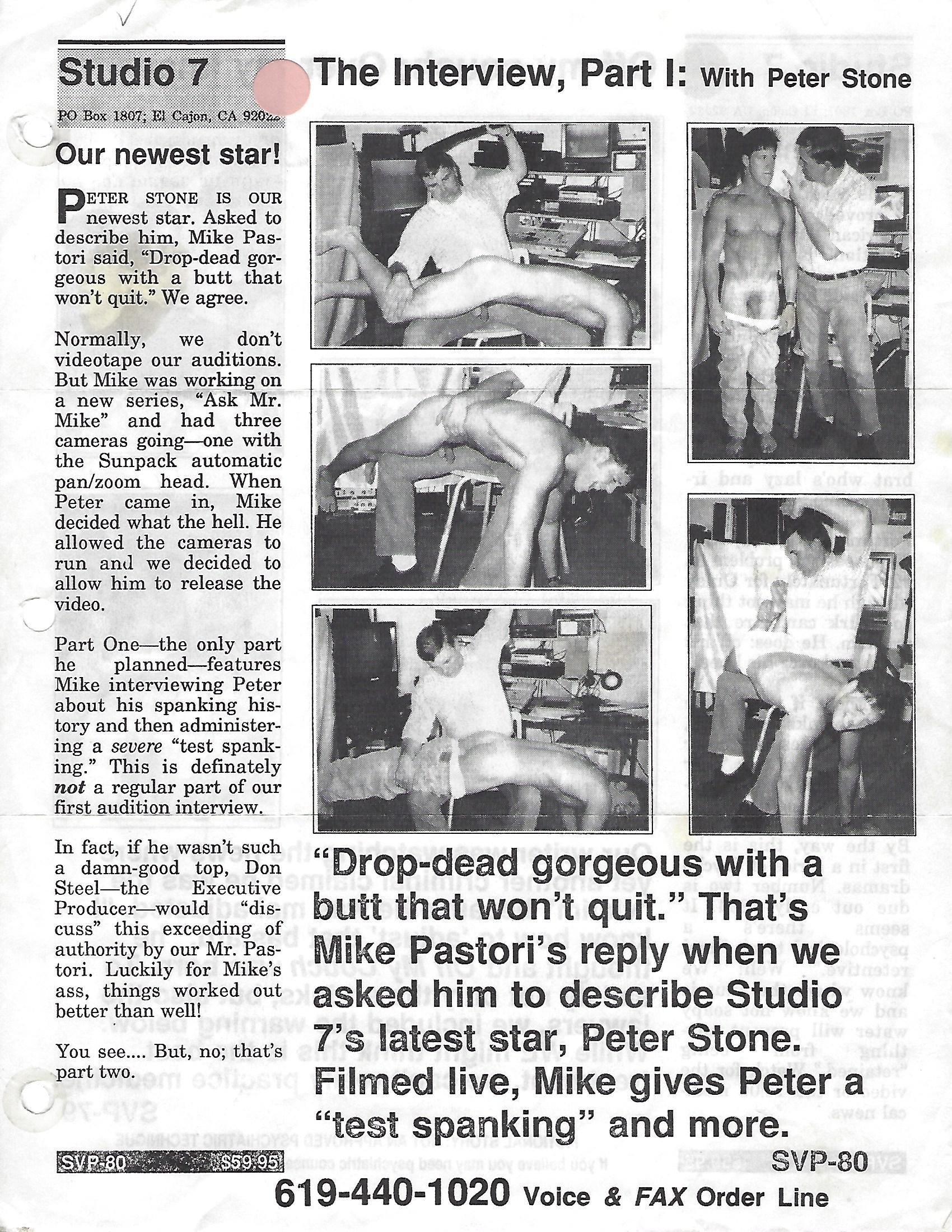 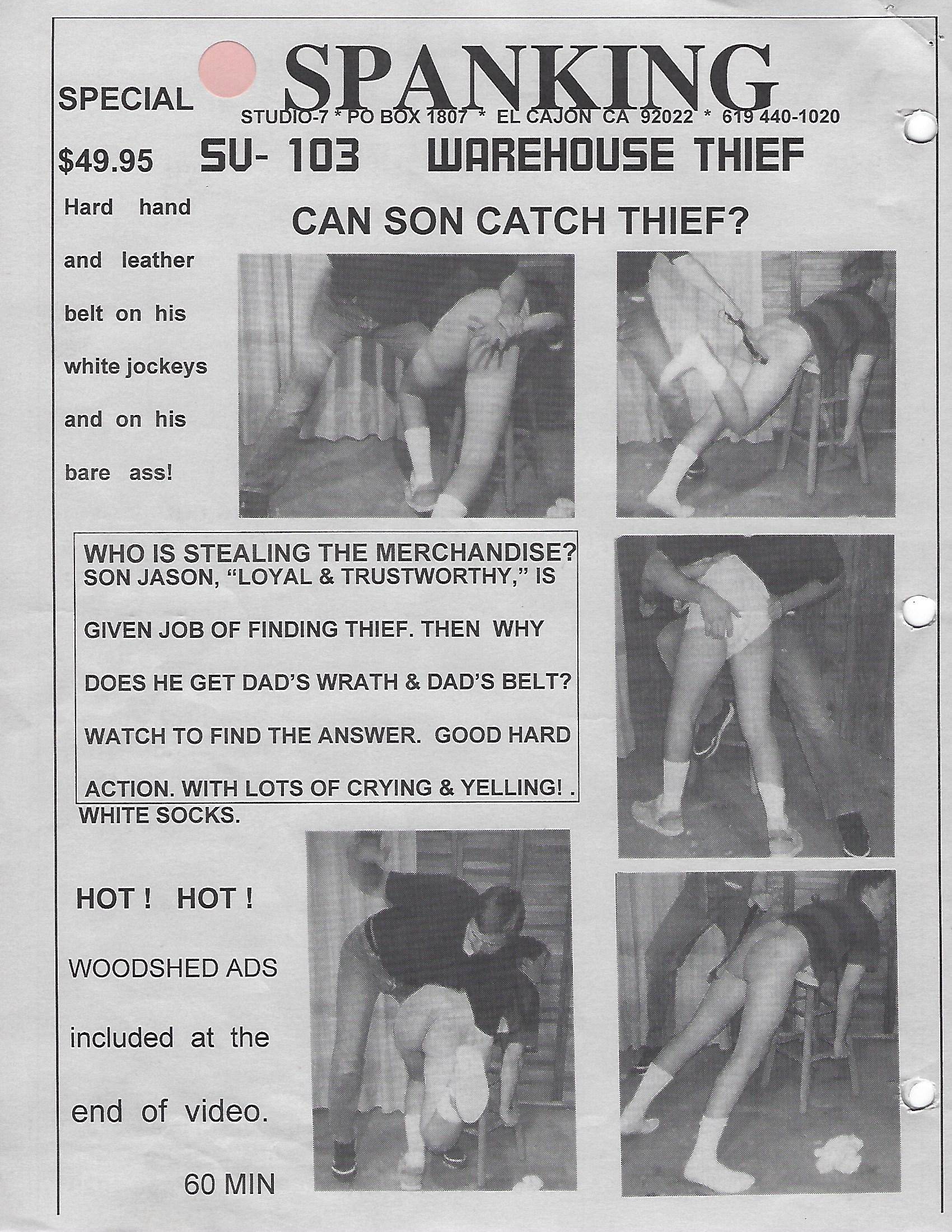 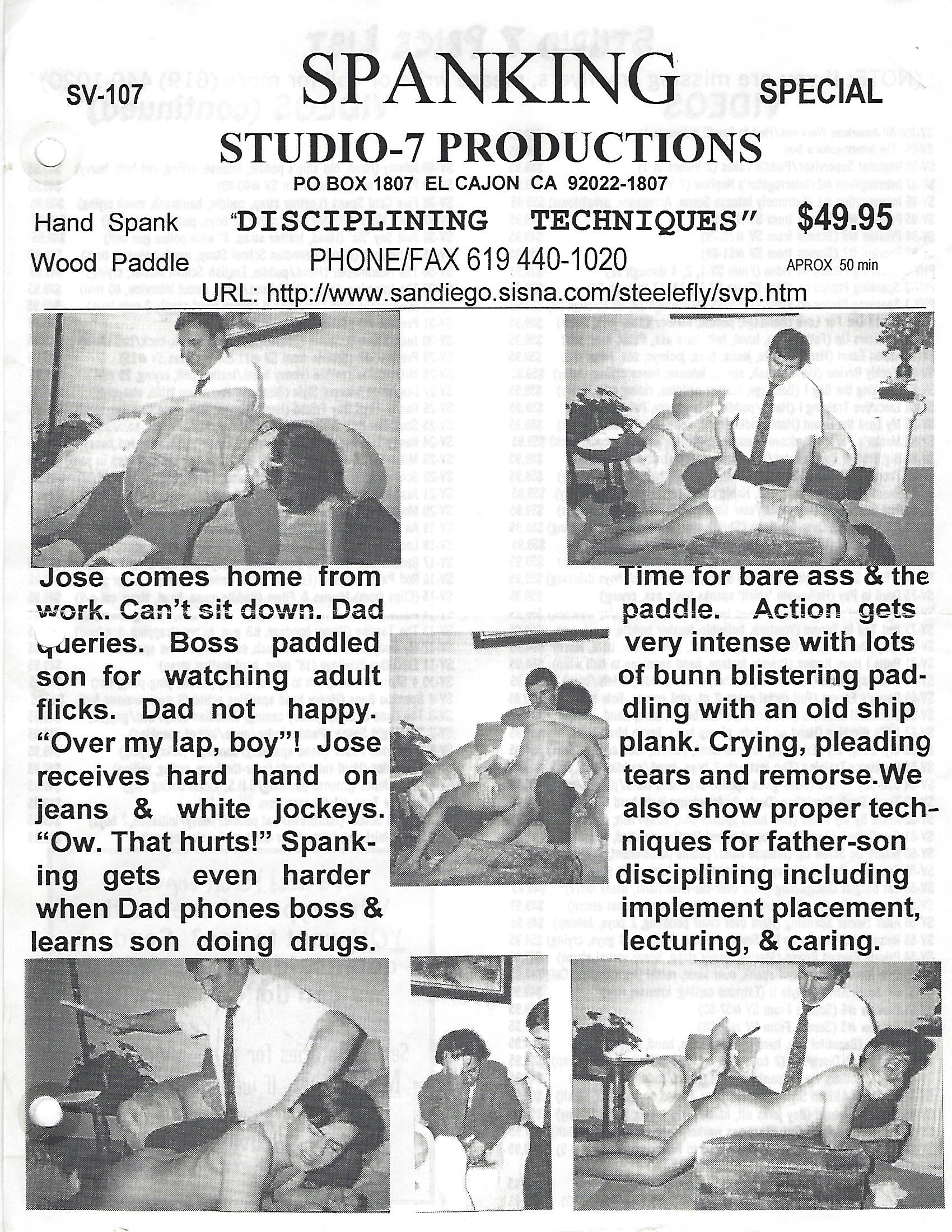 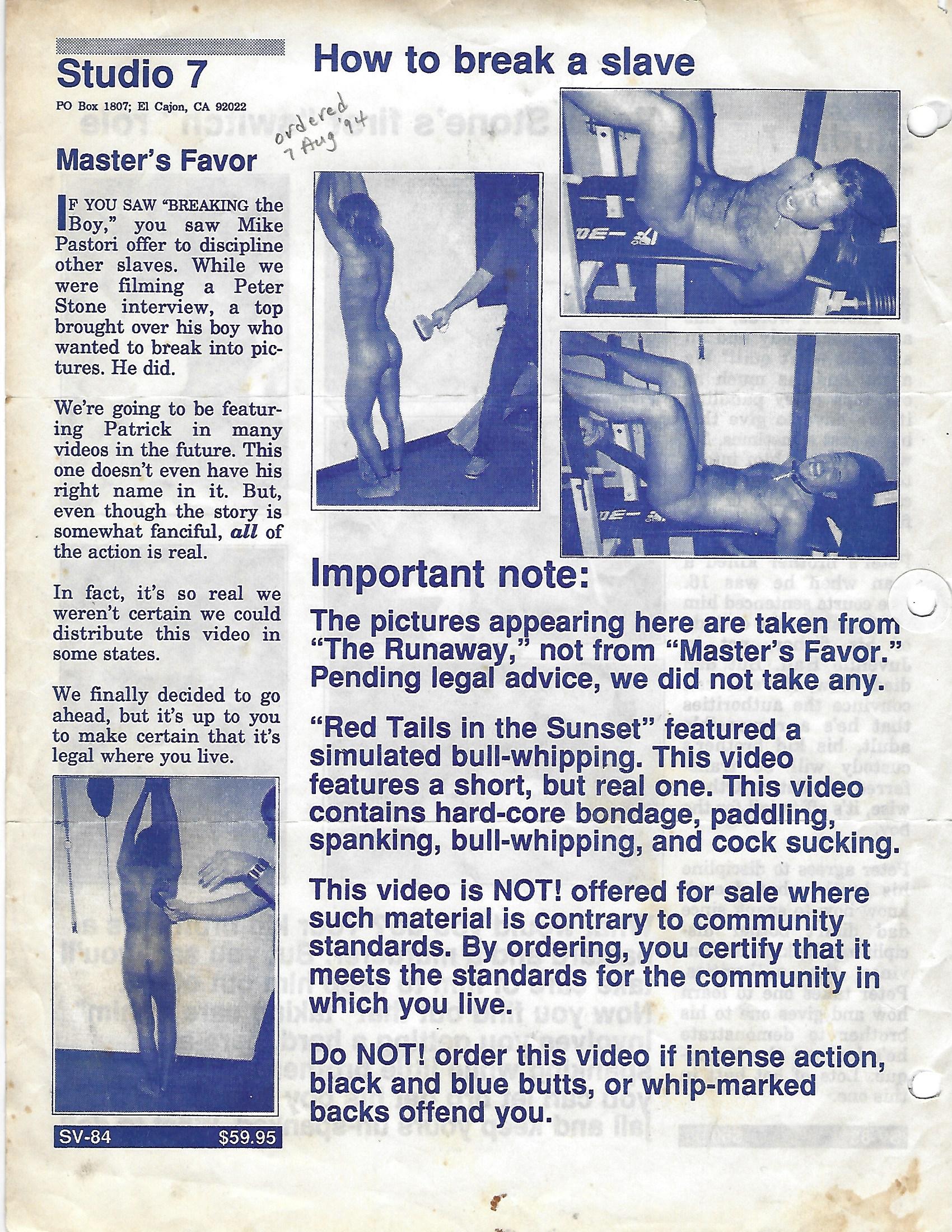 Mike, by all accounts, does not sound like a nice guy. I’ve never been one for brutal scenes

Exciting for sure to see these vintage flyers and read more of a truly harsh dom top spanker. I’ve been hoping to see any clips or the whole video of You Spanked the President’s Son? for many years now ever since I found individual pics on line which I now know were from this very same flyer! If anyone can post any or all of it, boy would it ever be appreciated!

Really enjoyed these history posts, thanks for all your hard work on them. There is something about the video stills on part 1 and 2 which seem so much more interesting than what is generally being produced now days commercially.

Could be its just misleading and its just the fact they are “aged” photos, or maybe it was it the limitation of technology for older videos meant they come across more realistic, less “perfect” in terms of editing and shots. More static shots, and filmed “as live” meant better reactions maybe from the models? Or it could be the clothing which just makes it feel more real? Or could simply be they pushed the models too far which is rightly unacceptable.

Also can’t remember the last time I have seen a video where the position shown in “Cry Baby, Cry” is used (OTK with leg lock) which is a shame. The other OTK shots from part 1 look amazing too (Uncle Ben, The Tutor etc)

I really love those videos
the guy that ran that company was awesome, He was always willing to talk to customers and help match their taste with the perfect selection
i regret that I never asked for more info about two of my favorite of their models
Tomas from maître d’ screw up
and Vahn Oulay from weekly review
Does any one here have any info about them? i.e. what was their back story, what brought them to Studio-7, what were they like to work with?
If any one has any info at all I would really like to hear about it. The owner mentioned to me once about Vahn Oulay “That kid was really something”

Well as a younger fan of spanking I haven’t had the “pleasure” of seeing these clips although I have seen this top in a few clips circulating online but what I really liked about these older clips is how real they all seemed not in comparison to some of the ridiculous stuff we see today (I will not name any studios but some have lost the plot and gotten so diabolical that I can’t take them seriously most M/M spanking studios out there today are pure garbage) anyway I’d be really interested in seeing these if someone has them somewhere please let us all know!! It does seem like this particular spanker was cruel and mistreated people in general (well I’ll quickly add there’s a lot of bad people working at some of these current spanking studios if only y’all knew!!) however he got his just desserts in the end didn’t he… just saying!! None the less interesting reading!

Does anyone know where we can find any of these videos? I would love to be able to watch them!