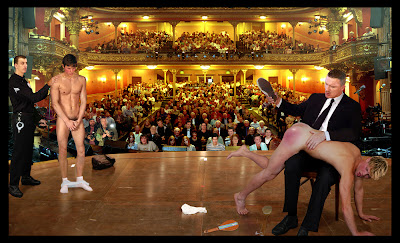 When the Brewster brothers were caught trying to rob the ticket office at the town theater Deputy Cluster called their father Noah Brewster and told him he could either deal with his sons or they could spend the night in jail.

When Noah discovered what his boys had been up to, he decided that a very embarrassing punishment was in order.  So, with the enthusiastic agreement of the theater management and performing artist, when the audience, consisting of most of the local town folk had assembled for that afternoon’s show, Noah stepped on stage, dressed in his best Sunday suit, and made an announcement.  He told them that the main show would be delayed by forty minutes, and that before it started there would be an additional “warm up” act.

At that point Deputy Cluster led the two red faced Brewster brothers onto stage wearing nothing but their skimpy white underpants, and they were down around the unlucky lads’ ankles, leaving them totally naked and trying to cover their genitals with their hands.

Noah explained what the boys had done, and then announced, to a cheer from the already applauding crowd, that they would both receive “a bare bottom spanking, right here on stage”.

With that, he sat down and then, as Cluster led the embarrassed boys to him, proceeded to pull each one in turn over his knee and gave both the young rascals a twenty minute spanking, using various implements from the theater’s supply of props, which the manager had happily supplied.

The  whole audience cheered and applauded with delight, they all knew the Brewster Brothers,  Randy and Rusty, and many had good enough reason to enjoy watching them getting their bare behinds toasted, their enjoyment all the greater knowing how embarrassing the arrogant young pair would find the experience.

Noah presented the audience with a great show, years of chopping wood had given him very powerful arms, and each boy was soon squealing and yelling as the loud whacks and swats echoed around the old play house. 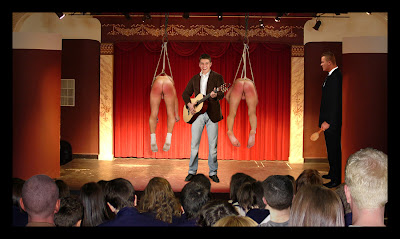 Even when the spanking finally ended, Noah had more embarrassment in store for his wayward  sons, using the harnesses previously used for the actors playing angels in the Christmas play, or the  wicked witch when the town’s dramatic Society put on the Wizard of Oz, to the Brewster Boys’ horror he hoisted them so that they dangled above the stage, where they would remain with their bare, and well spanked bottoms on full view  for all of the three hour show.

Noah remained on the side of the stage, bath brush in hand ready to deliver a few extra whacks whenever the red glow showed any sign of fading from the boys cheeks (which he did a number of times)

There were certainly eight glowing pink cheeks on stage that night. 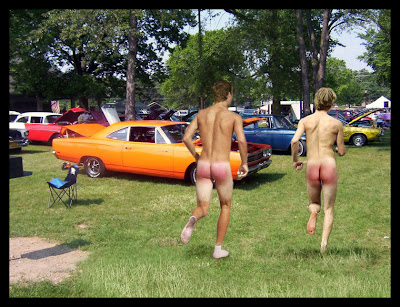 Finally the show ended, but the unlucky young miscreants’ punishment was not over, for, when they were let down, they discovered that their clothes had mysteriously vanished, so they had to run all the way home bare butt naked.

That was a day the town would never forget, and neither would Randy and Rusty Brewster, no matter how hard they tried to!!

📂This entry was posted in embarrassment humiliation Photoshop

Is that Sarah Palin in the audience?

More effective lead them onstage in tighties up then handcuff hands behind. Then yank down tightie facing audience then over the knee.

Thanks very much, that is praise indeed! Yes it was inspired by the wonderful Jonathan illustration, I really should have acknowledged that when I posted it.

Great story. The spamkings I most remember were the ones involving others – totally embarrassing.

I am not sure I understand, but I’ll take it as a compliment!!! 🙂