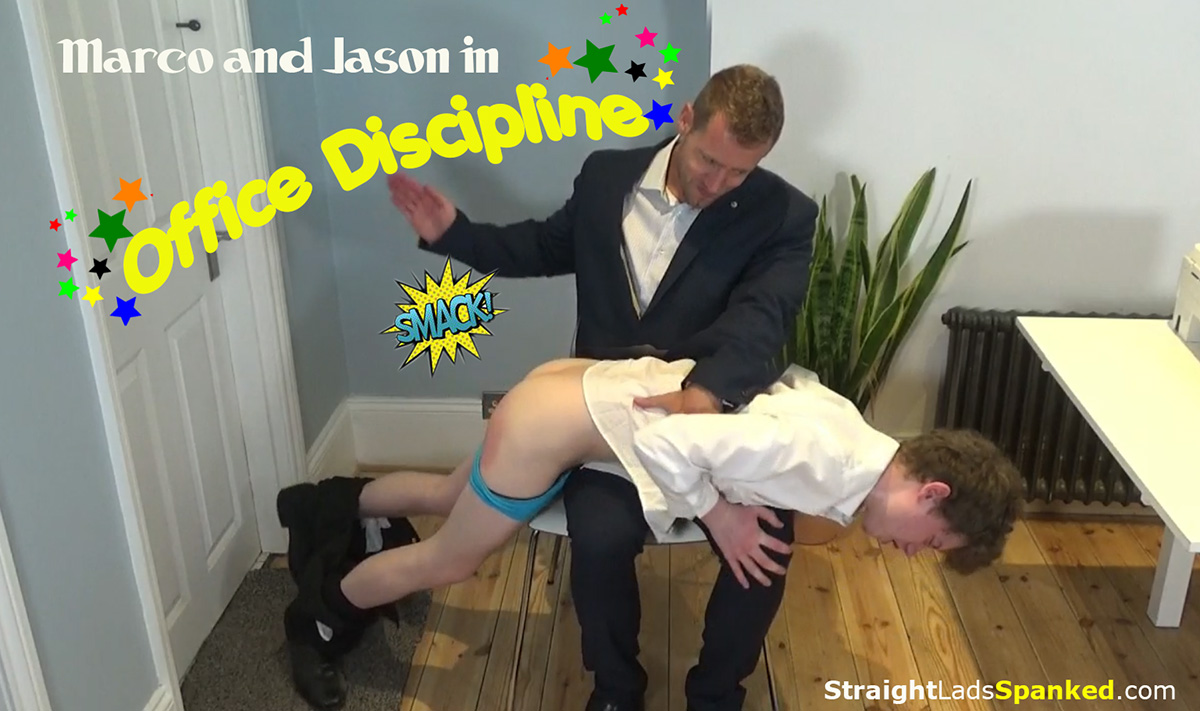 Jason has a brand new job working in the bank. This is such a wonderful opportunity and even though he is only an office junior, Jason has high hopes and lots of ambition.

Travelling through London can be erratic at best and Jason messed up and was a few minutes late. This was noticed by his senior manager, Marco.

Marco is in charge that day and decides that Jason needs to have a better attitude. So in the privacy of the office, Marco decides that a spanked bottom might ensure Jason is not late again!

Jason can’t believe it! This is not what he was expecting to happen in the workplace in 2018! It doesn’t seem fair but Jason doesn’t want to lose the job so he really feels he has no choice.

Click here or on the Continue Reading tab below to see more.

The 18 year old lad finds himself draped over Marco’s knees. Marco is a big, muscular man and Jason is left in no doubt who is in charge has he feels Marco’s hand spank his bottom.

First Marco spanks Jason on the seat of his work trousers

It gets a lot worse for Jason when his trousers get pulled down and the spanking continues over his underwear.

It gets almost unbearable when he gets spanked on his bare bottom!

Sorry and sore Jason vows to be on time tomorrow!

I wonder how long that will last ……..

Thanks very much for this post. It appears our dear Jason is having a great time! Cute bum – perfect for spanking! Thanks again.

Oh my ears and whiskers! I just ADORE this cheeky, naughty, super-cute little lad! He is so sweet I could eat him – having, of course, first laid him over my knee for a soundly smacked bottom! I never tire of seeing Jason getting spanked and I think in some ways this is his best clip yet!

The irony is that the poor little fellow ends up being punished for being too friendly – not something you could necessarily fault him for, and like a lot of boys his age all he needs is to be taken in hand and disciplined. And what a lesson he truly gets taught! Marco clearly knows his job when it comes to making sure that young lads learn their manners!

The spanking Jason gets gives a veritable forest of ticks to my boxes! First of all, his well-fitting black trousers which along with the white shirt make this smacking delectably reminiscent of school corporal punishment – and then a glimpse through the nicely translucent white poly-cotton of his shirt of the waistband of his underpants as he is laid over the knee to be punished! Wondering what colour pants he’s go on, knowing from seeing Jason getting smacked before that he does wear coloured underpants, and then finding out when he as to take his trousers down! The discussion about this and the suspense as he argues about getting smacked on his underpants are such a turn-on, as is Marco’s reference to the colour of his boxer-briefs which are also the perfect length to be worn as spankingwear! I remember occasions when I was getting a spanking as a youngster having remarks made about the colour of my briefs as the smacks rained down on the seat of them! It was deliciously, boner-makingly embarrassing and added no end to the humiliation of being tanned!

I am not the greatest fan of spanking on the bare bottom and seldom administer it myself, as I much prefer to see a boy’s bum framed by a pair of coloured underpants (especially briefs, yum yum!!). However, I’d be the first to say that a bare bottom as pert, cheeky, smooth and hairless as young Jason’s could not POSSIBLY be left unsmacked!! It completes what I’ll say again is the biggest turn-on of a spanking I’ve seen the lad get yet! His shame-faced discomfort as he pulls his boxers and trousers back up is a clear sign that a valuable lesson in self-discipline has been smacked into him – though part of me can’t help wishing that it is quickly forgotten!

The other major WOW!! factor with this naughty young lad is that he can take being walloped very hard in a way that I’ve known to reduce bigger and older boys laying over my own knee to yelping, blubbering wrecks after less than half of what Jason usually gets to discipline him! For me, a big lover of those fantastically spankable young rascals that we’ve seen over the time of my acquaintance with the wonderful work of SLS, he is the best, the most smackable yet – and the gods of Spankers’ Heaven know, the competition has been stiff enough (and it hasn’t been the only thing, hahaha!!!)!!