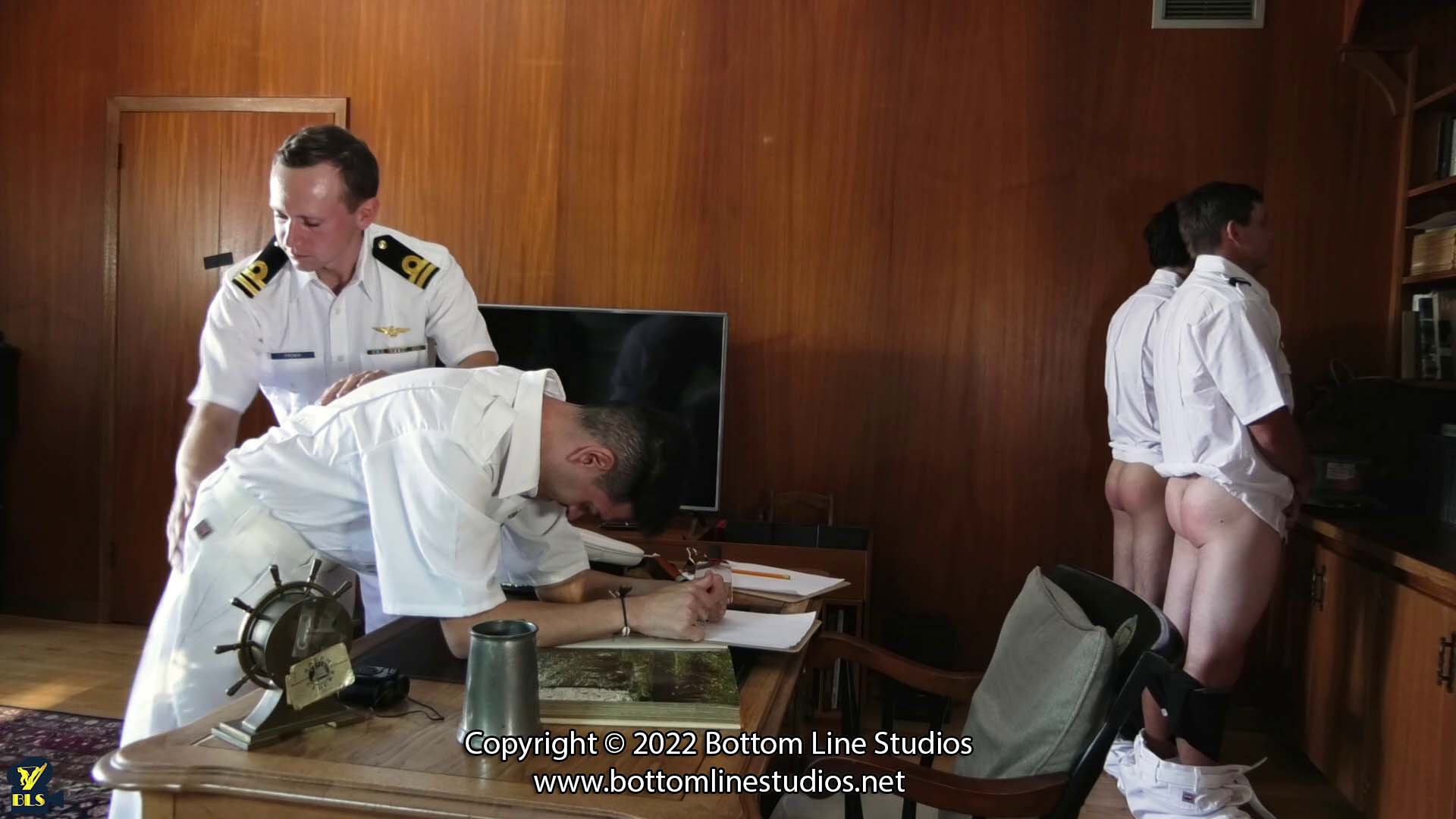 Discipline continues in the office as Lt. Riley French deals with Alex and Marc. 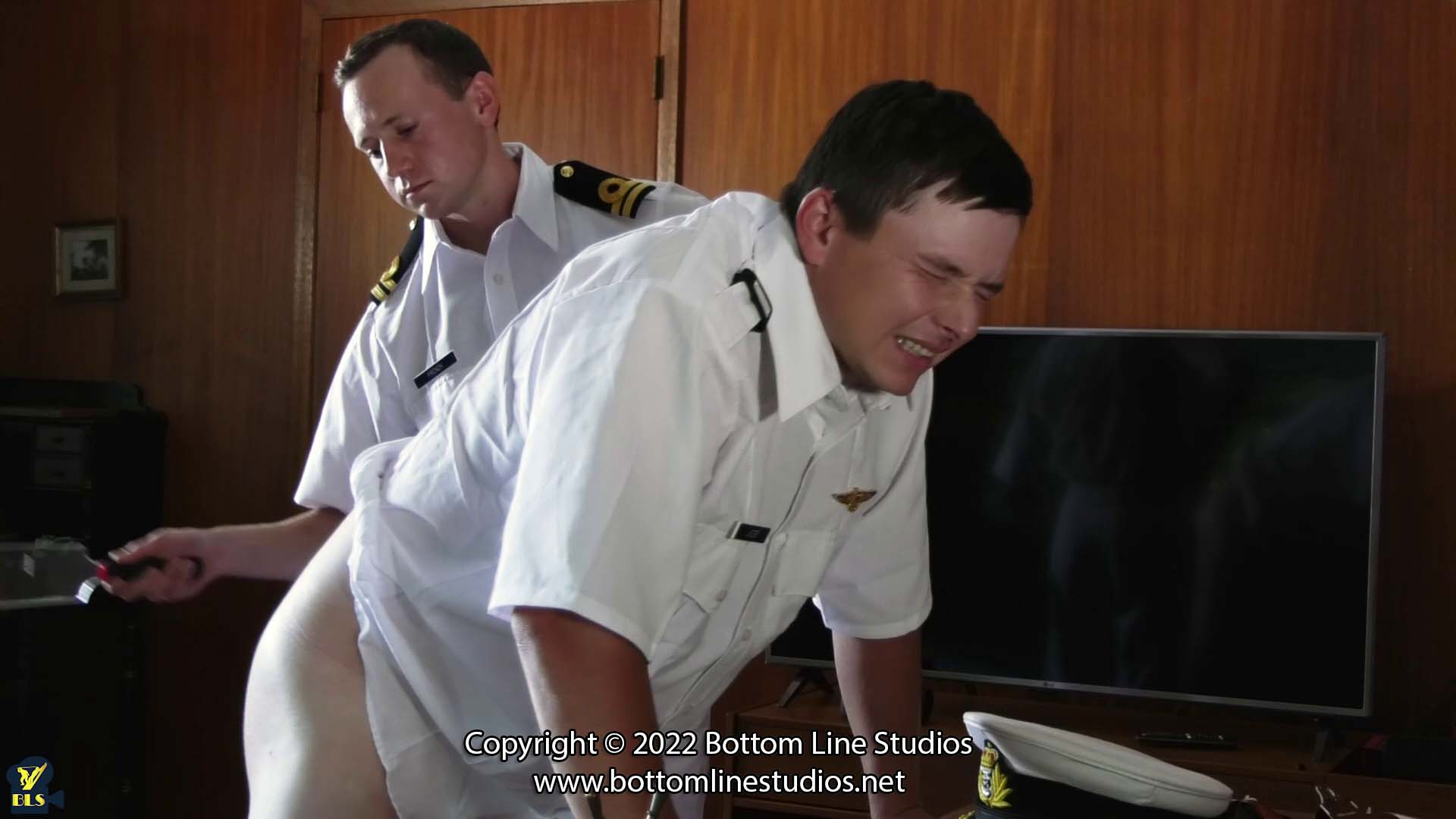 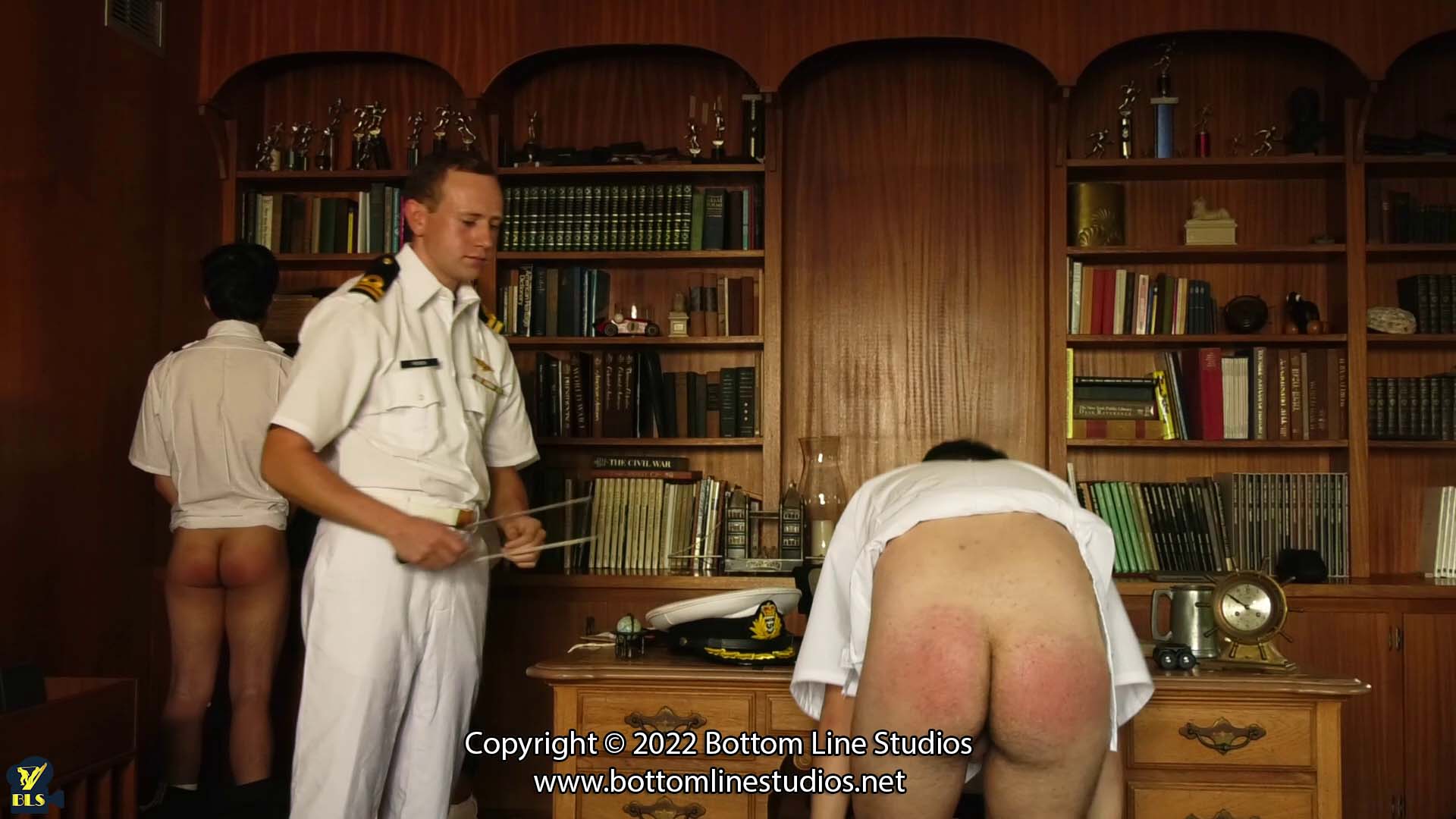 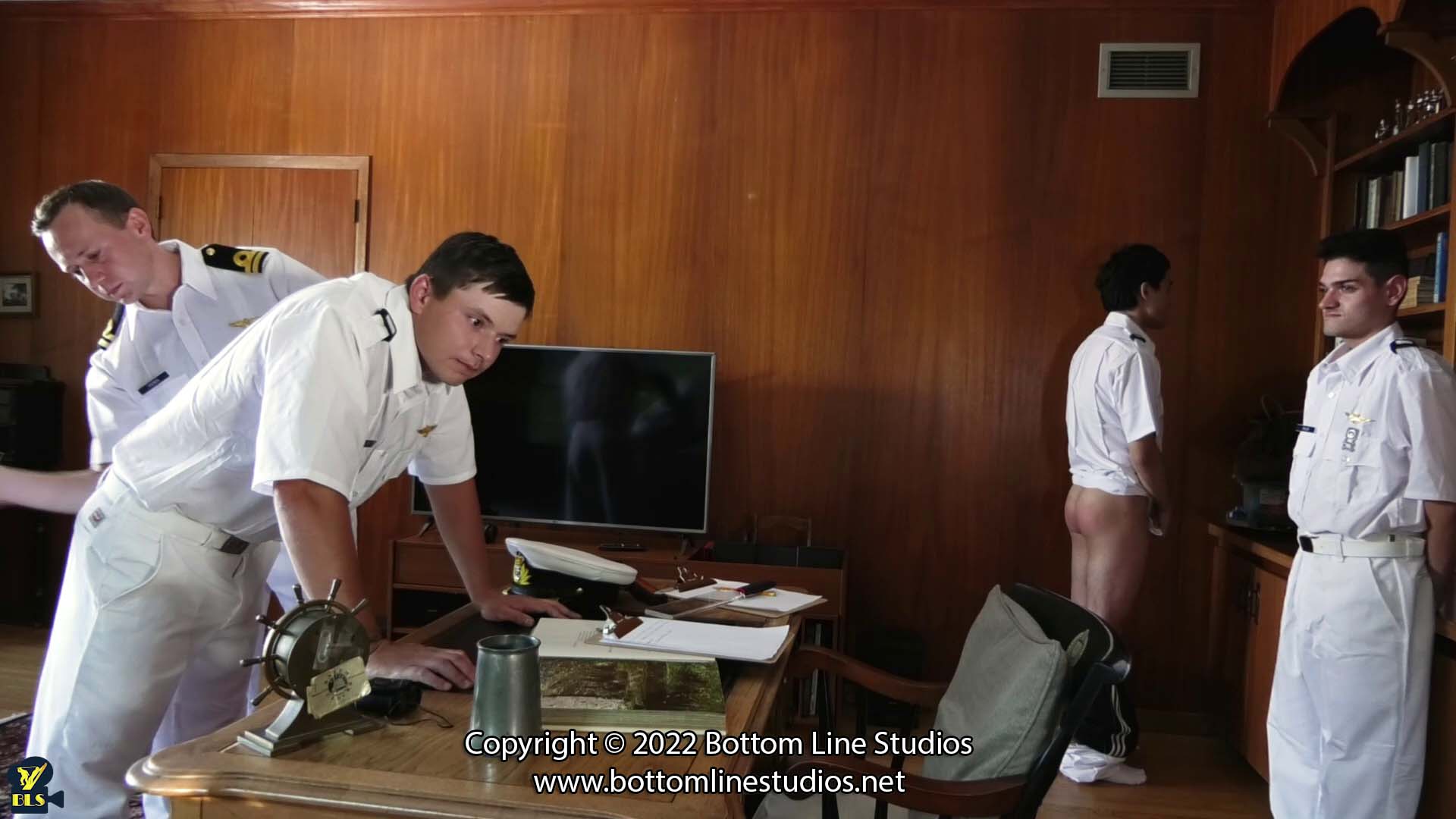 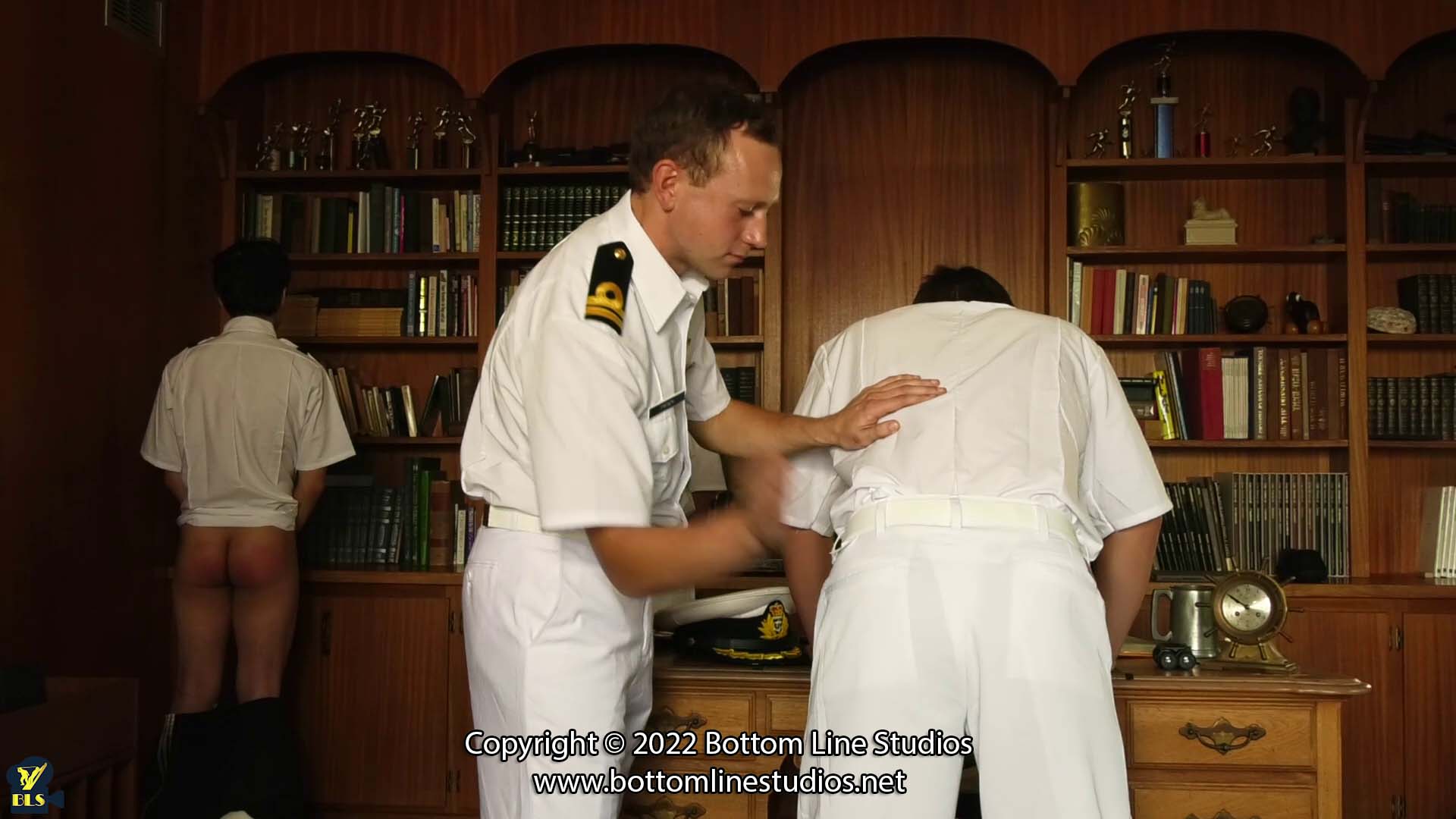 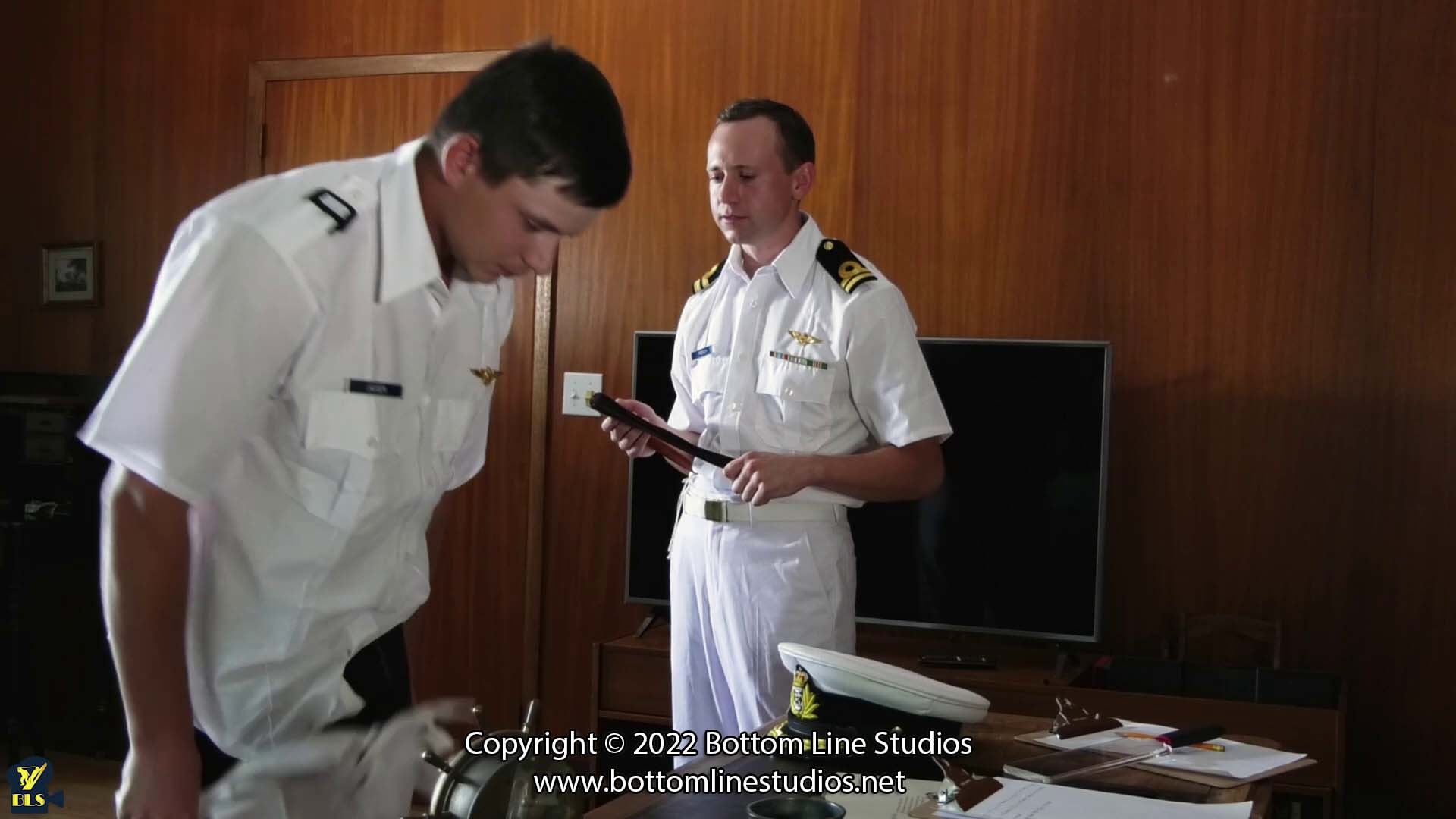 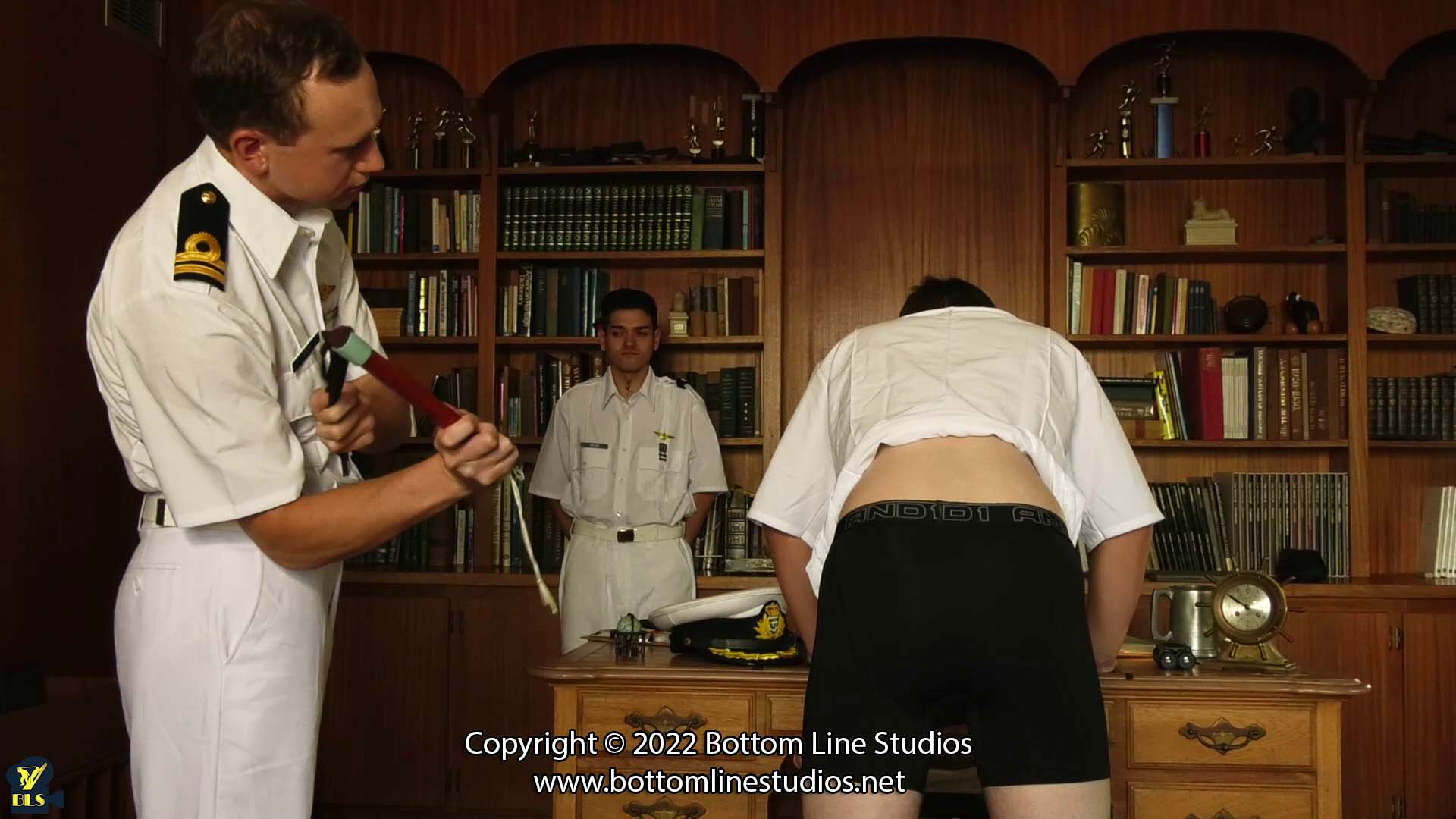 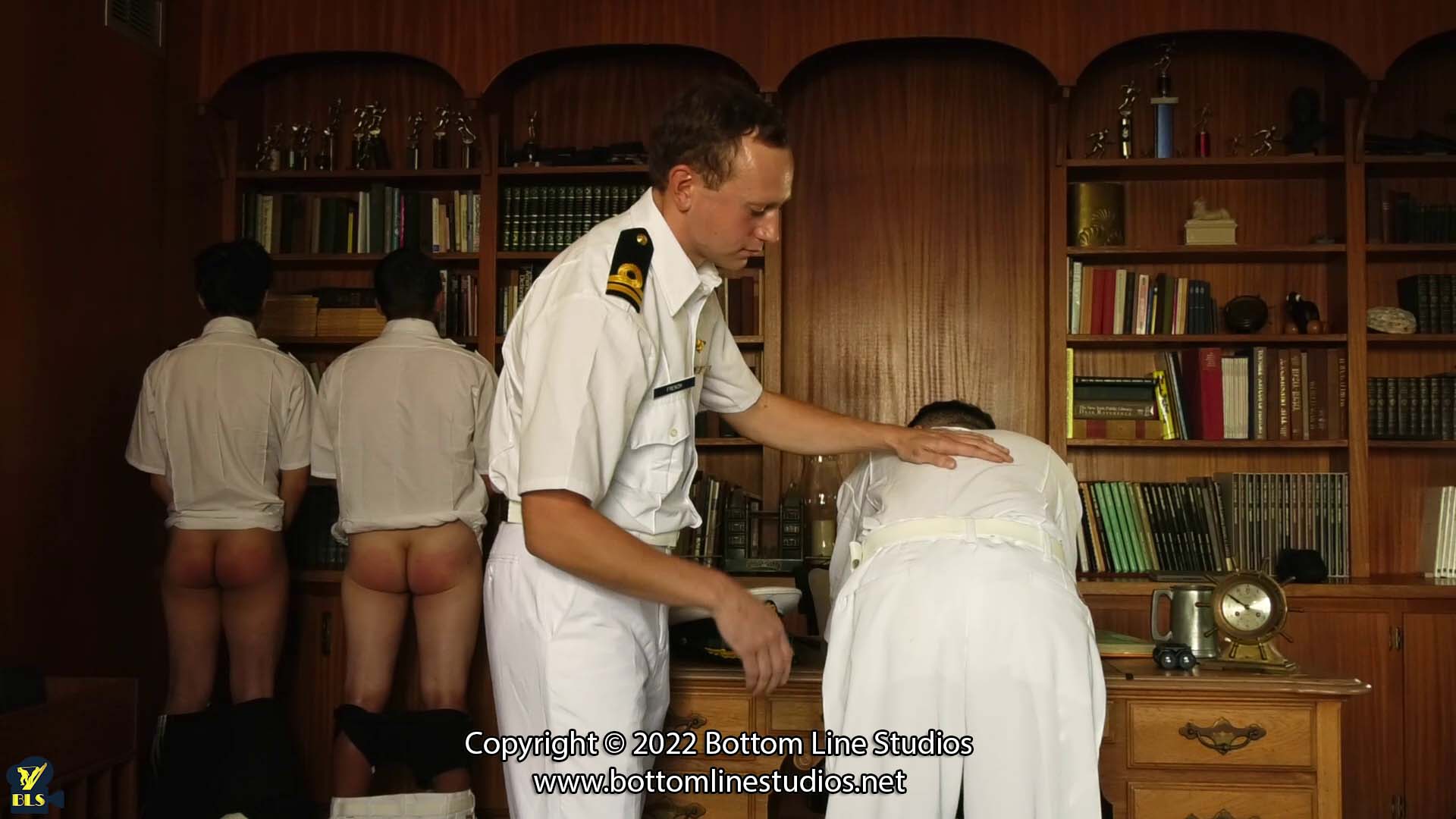 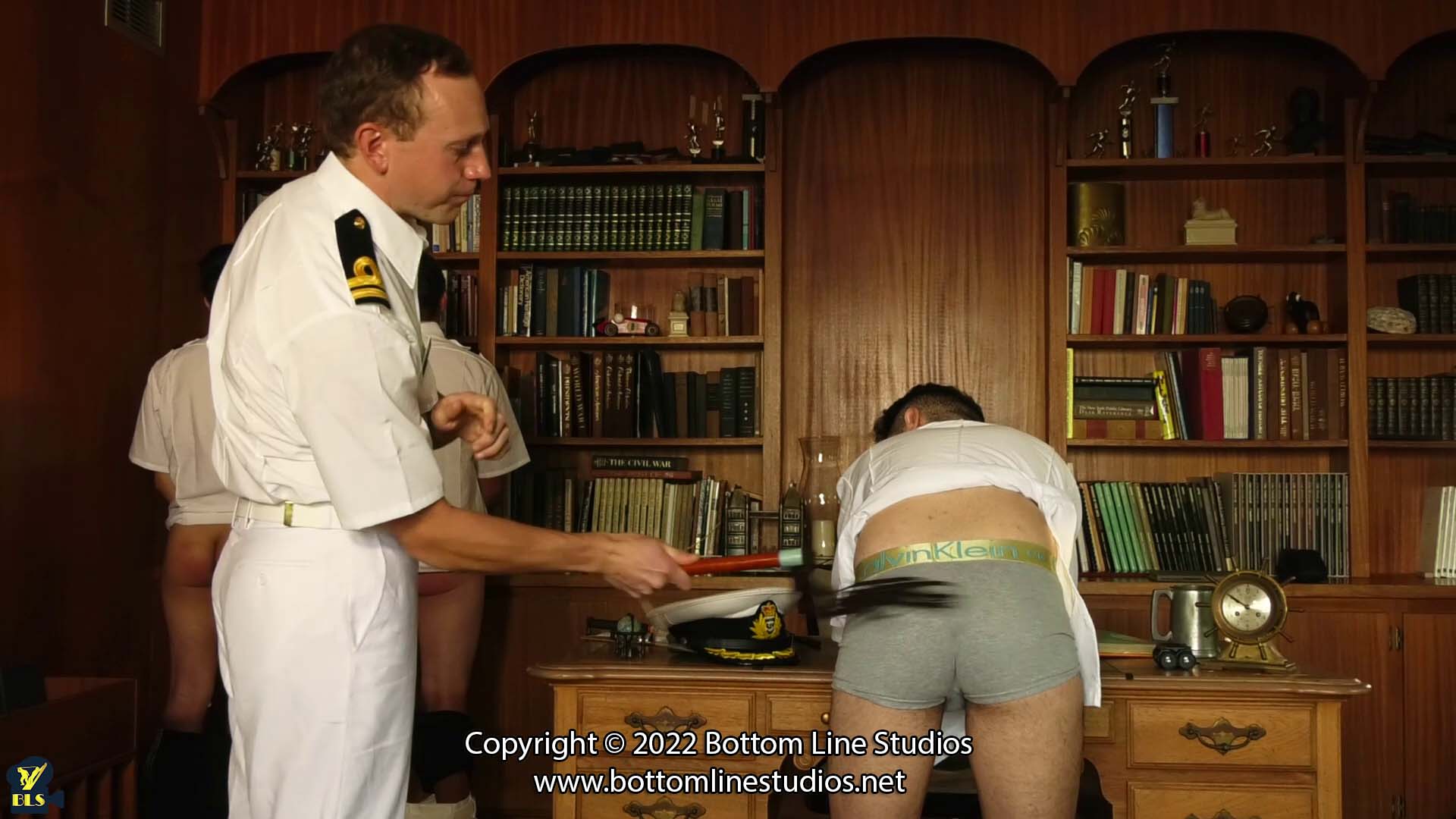 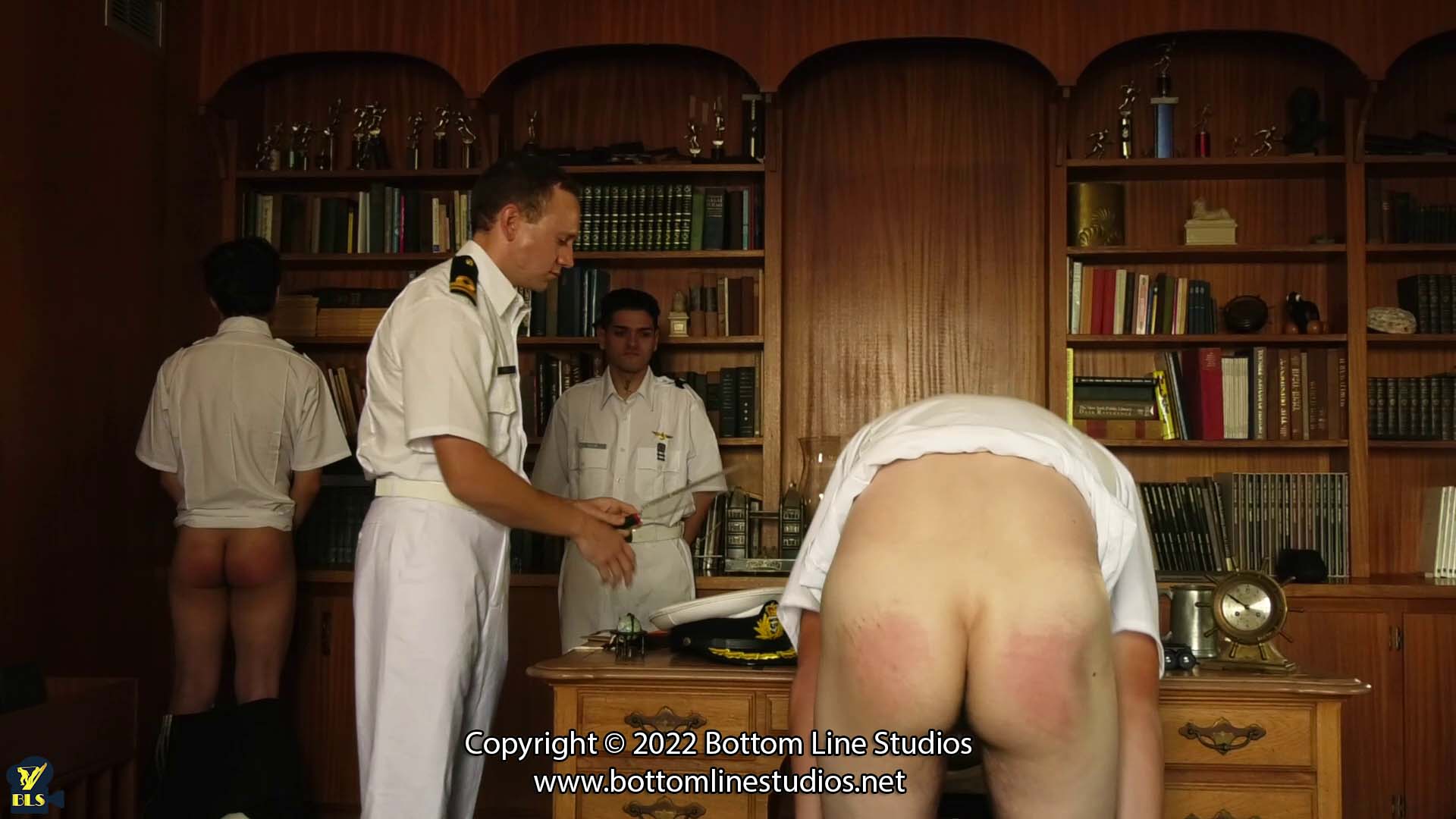 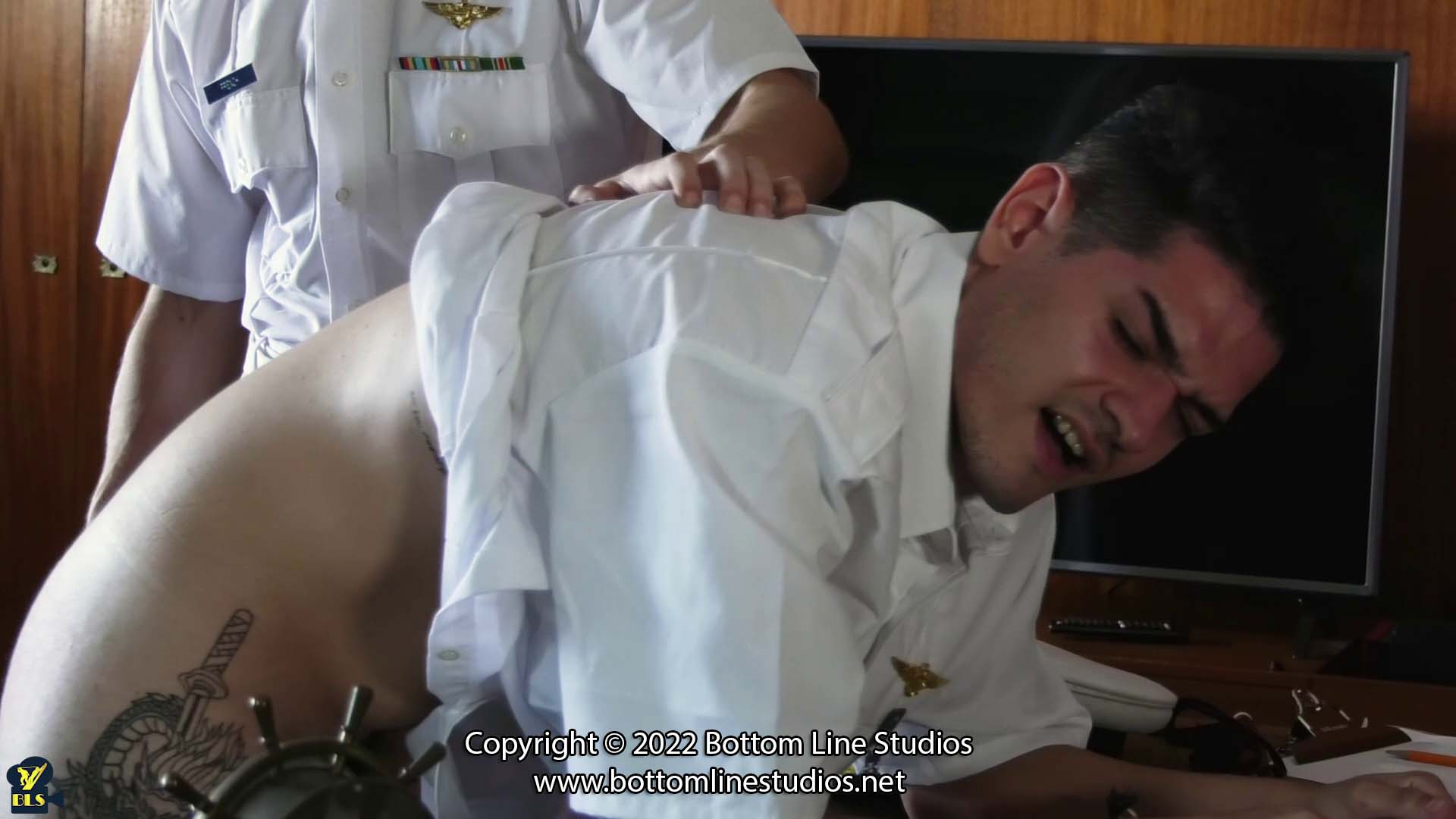 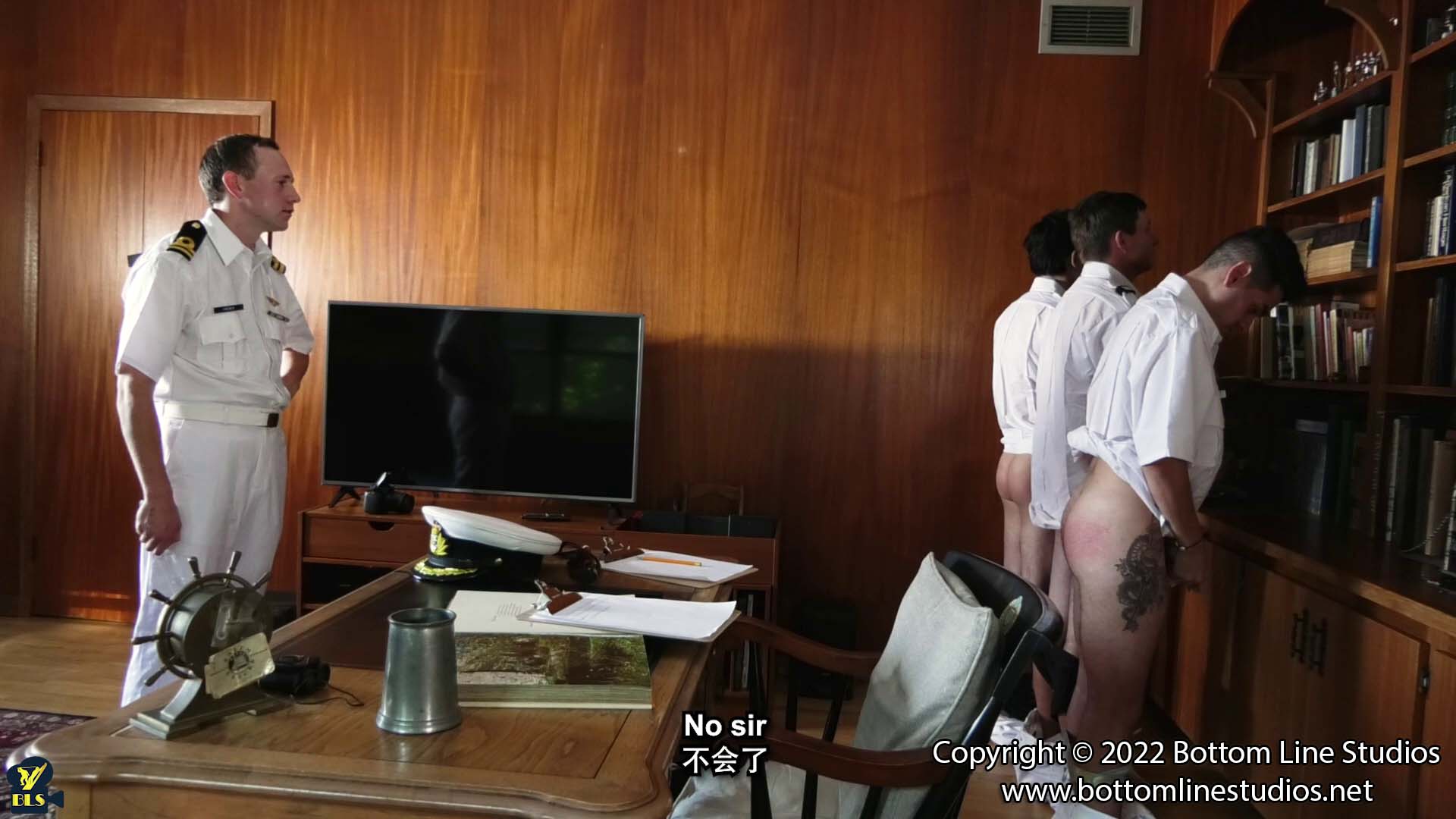 Riley needs to be getting the lexan paddle – not using it.

Unlike this sullen CO’s excellent, ever-attentive, tireless perfectionist Sub Diego, who scolds and spanks his shivering charges’ defrocked derrieres duly-dolefully as daily due deserts while diligently drilling their duties, Riley himself is a laughable, lewd lieutenant and ludicrously lazy (lap) dog, aptly named French: all pompous bark, rarely any bite, so instead of constantly supervising, commenting, correcting and correct-conduct-compellingly castigating his currish cadets, the lax Lieutenant merely collects (ir)regular remarks from other staff in a demerits book, and dully distributes their weekend leave passes after applying an arse-agony-tariff to their trembling trousers-down tails, on display nose to wall as most of their mates may simply collect their passes, although most should shiver suitably sorely-sore-spanked for spankable staff Sir simply seems to miss or ignore, a disastrous message ‘he rarely cares enough to check anything, you probably won’t get caught on his watch’.
As really regrettable result of rarely-ragless-rear-red-raw-ravaged rearing Riley-style, his boys lack clear and consistent CP-causality-conscience, getting away with too much and confused even when cones-crimson-chastised wondering what for and why that way, so ‘taking it like a man’ is the peculiar paternalistic price for a permit despite the poorest grades in academy.
His impressive arsenal of implements is essentially decorative, for keeping up the pretence of proper pain-punishments, which barely works with freshmen cadets, as he’s the laughing stock of all staff and seniors, a silly softy scribbler shy to scold, strip and spank sternly as suits a super-strict school to sort-out sailor squirts to submissive service by sounds spankings.
While Diego’s crimson-chastised charges fear his frequent command ‘hands on head’ at pain of another abundant abject-arse-agony afterward almost as much as his forceful fanny-flailing yielding yellow-spirited yelping in finest full-on fear for further flogging, forgetting about fun or foolery for-sure, and can only sleep on their bellies being blistered-bottoms-burn-burdened barely-bearably, Riley’s restrained rod-ride-reared rascals remain resigned, readily relaxing rosy-reared as they line-up all-on-ankles, composed to concentrate on cupping ‘coyly’ and the coveted congé to cavort carelessly.