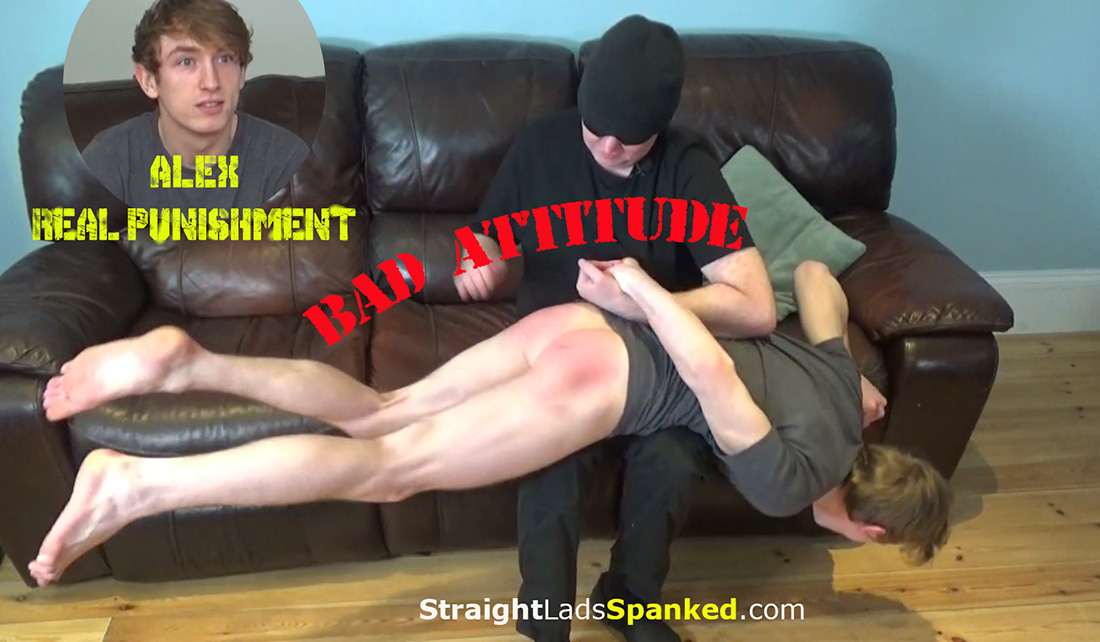 This is the second in a series of four postings featuring recent updates by Straight Lads Spanked:

In something of a departure from the studio’s usual format, the punishment meted out to the star of this male spanking movie is very real, and very well deserved!

Eighteen-year-old Alex had originally arranged to film a spanking movie on Wednesday. Dave even shelled out for his train ticket from the north of England, and went to the station to meet him. The problem was that Alex had decided in the meantime that he didn’t want to get spanked by a man after all, didn’t bother to let Dave know….and instead used the ticket to go on a day trip with a mate! And Dave? Well, let’s just say that he wasn’t best pleased…

Fast forward to Saturday. Alex is still broke, still needs to make some ready cash, and has now decided to go through with the filming. Generous to the last, Dave has agreed…. but on the condition that before he gets paid to make any spanking movies, Alex is going to be punished for real, for messing Dave around and letting him down. He is going to get the good spanking that he thoroughly deserves!

Alex isn’t thrilled by the prospect, you can tell, but he does at least admit that he probably deserves it, and in any case, if he wants to make some cash, he has got no choice! So over Dave’s knee he goes, for a spanking which Dave admits he is going to enjoy administering!

The teenager is smacked first on the seat of his black tracksuit trousers, before being told to take them down and bend over again.

by the time he is told to take down his pants to be spanked on his bare bottom, the nervous giggling has stopped, and instead Alex is wriggling and squirming around on Dave’s lap, kicking his legs uncontrollably.

Dave is clearly keen for the lad to reflect on his attitude and his obvious sense of entitlement, and punctuates the spanking by asking repeatedly if he is sorry for letting him down and using the train ticket to go on a jolly.

It’s fair to say that by the time the punishment is over, Alex is indeed a very sorry lad with a very sore red bottom, who will think twice before he ever does anything like that again!