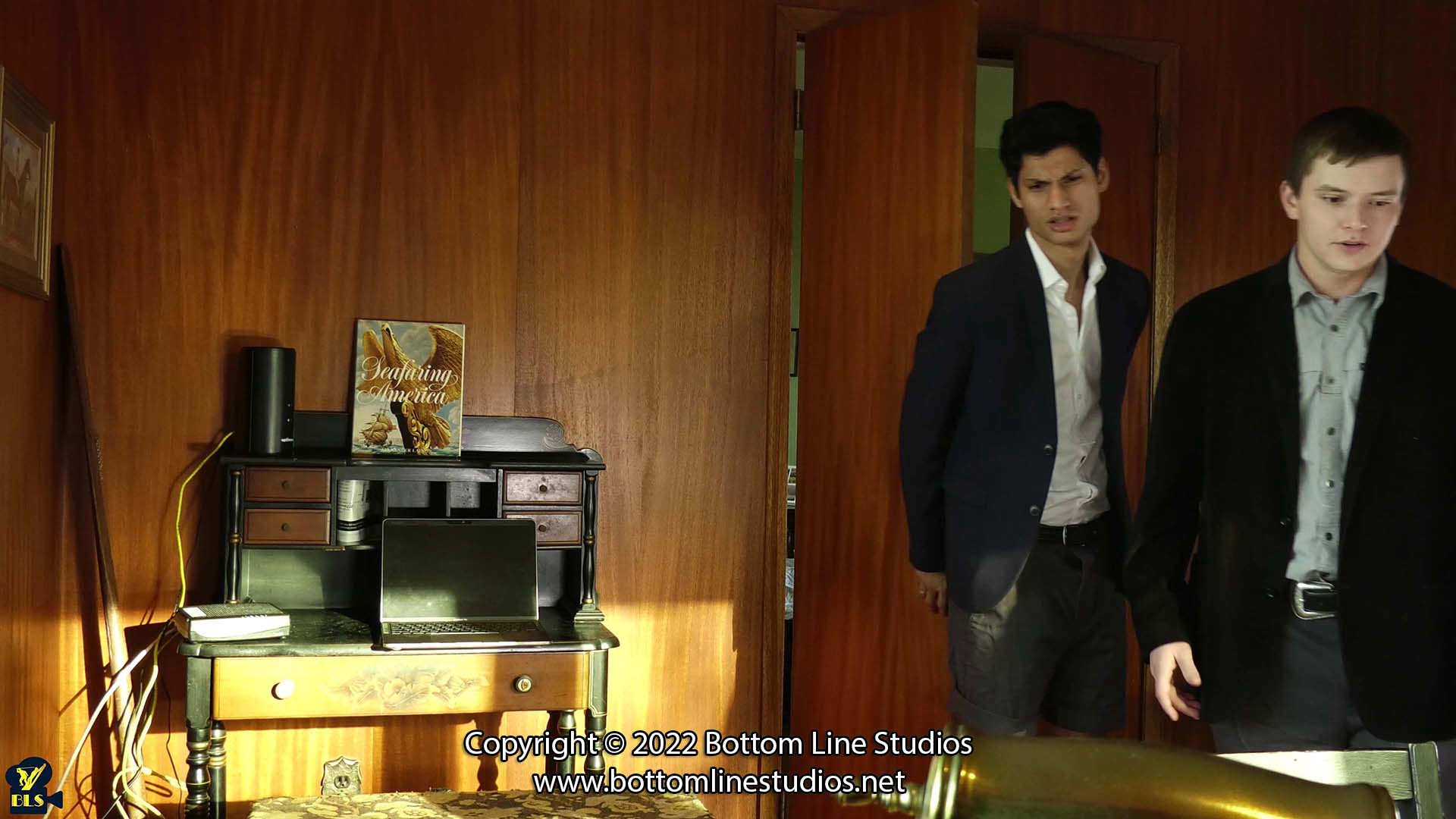 Alex and Diego have been caught goofing around outside and are assigned to clean the Headmaster’s office after school in detention by Coach French. The attention of the two errant boys though quickly turns from cleaning to an open laptop… 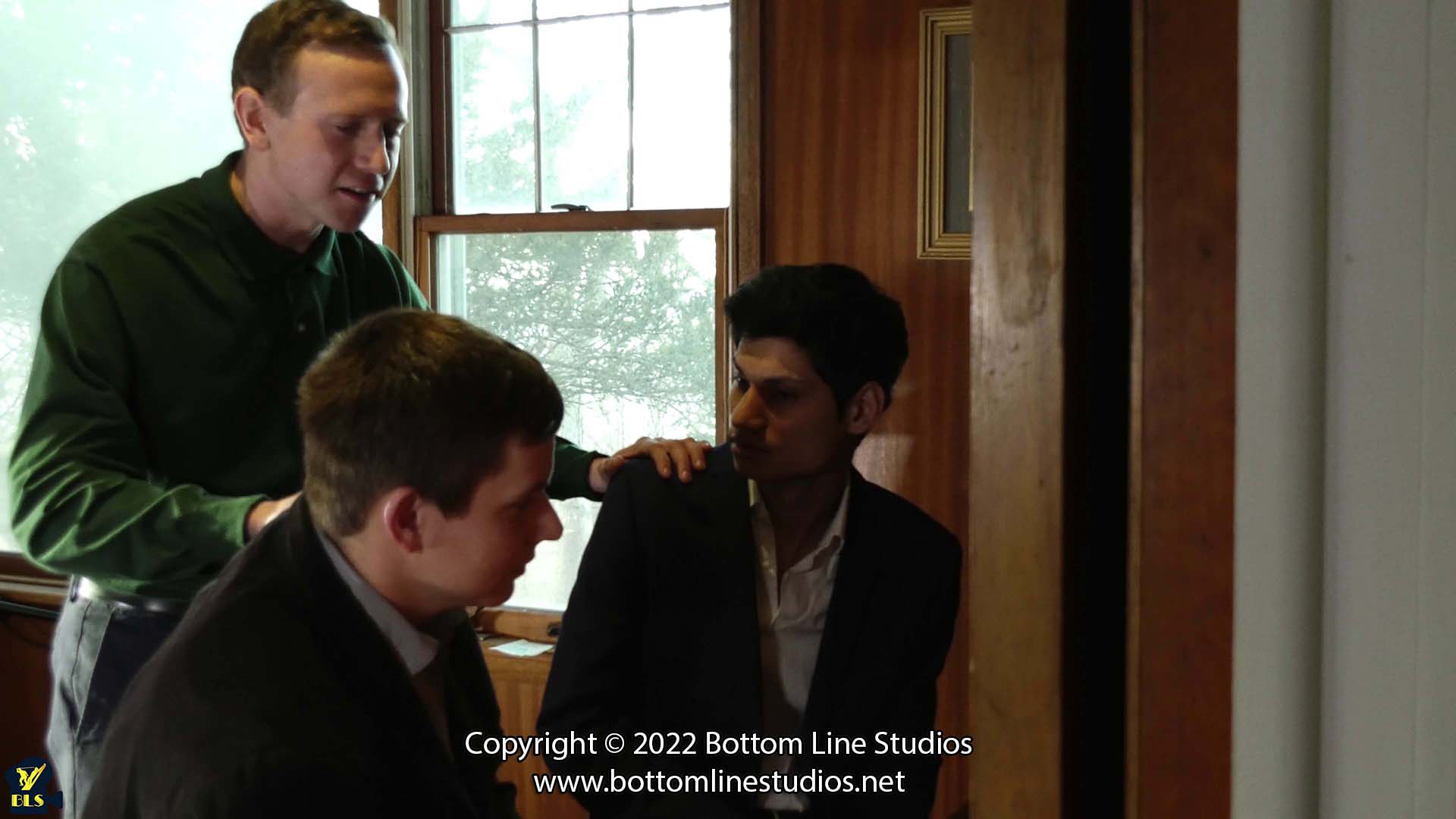 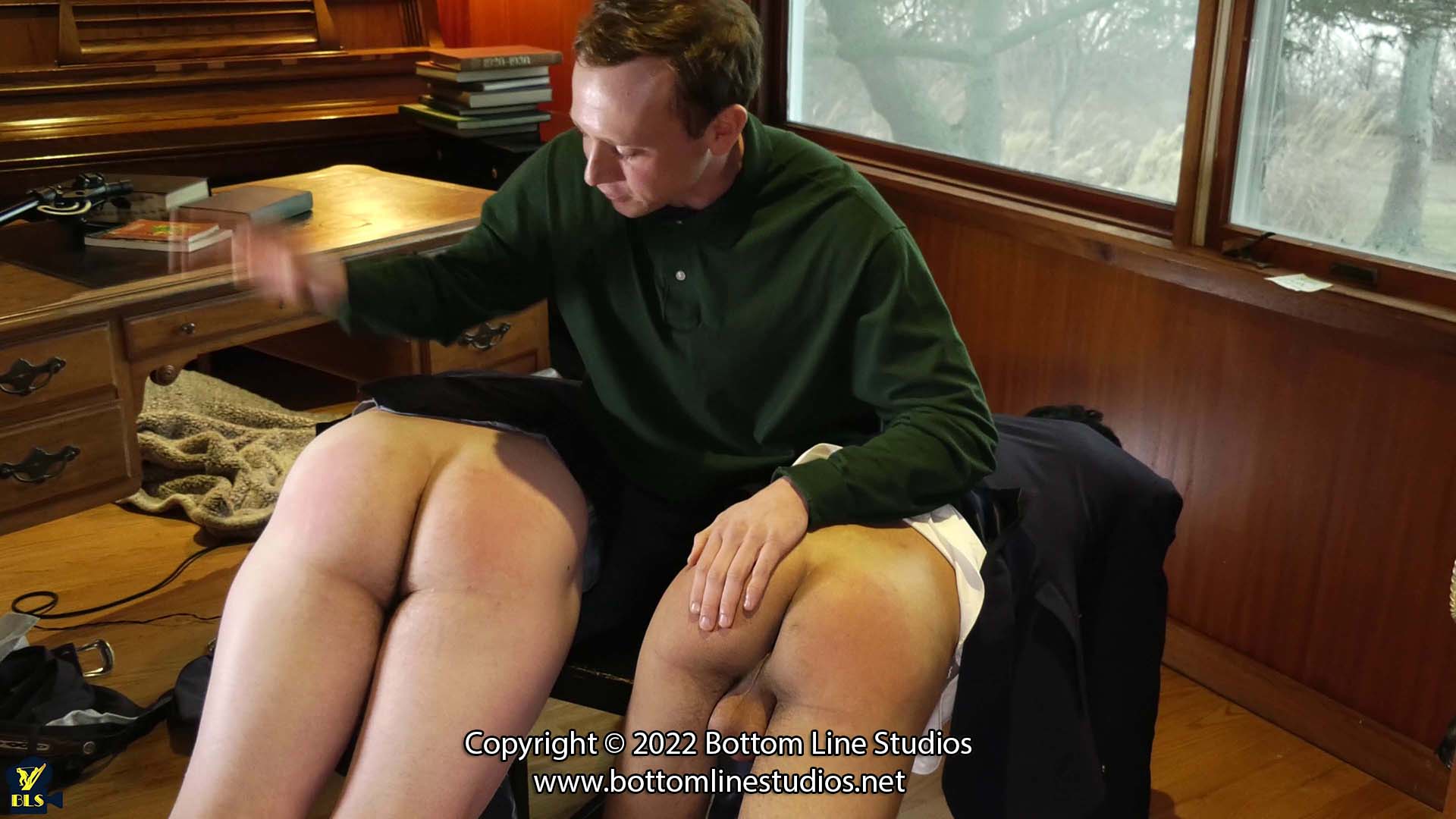 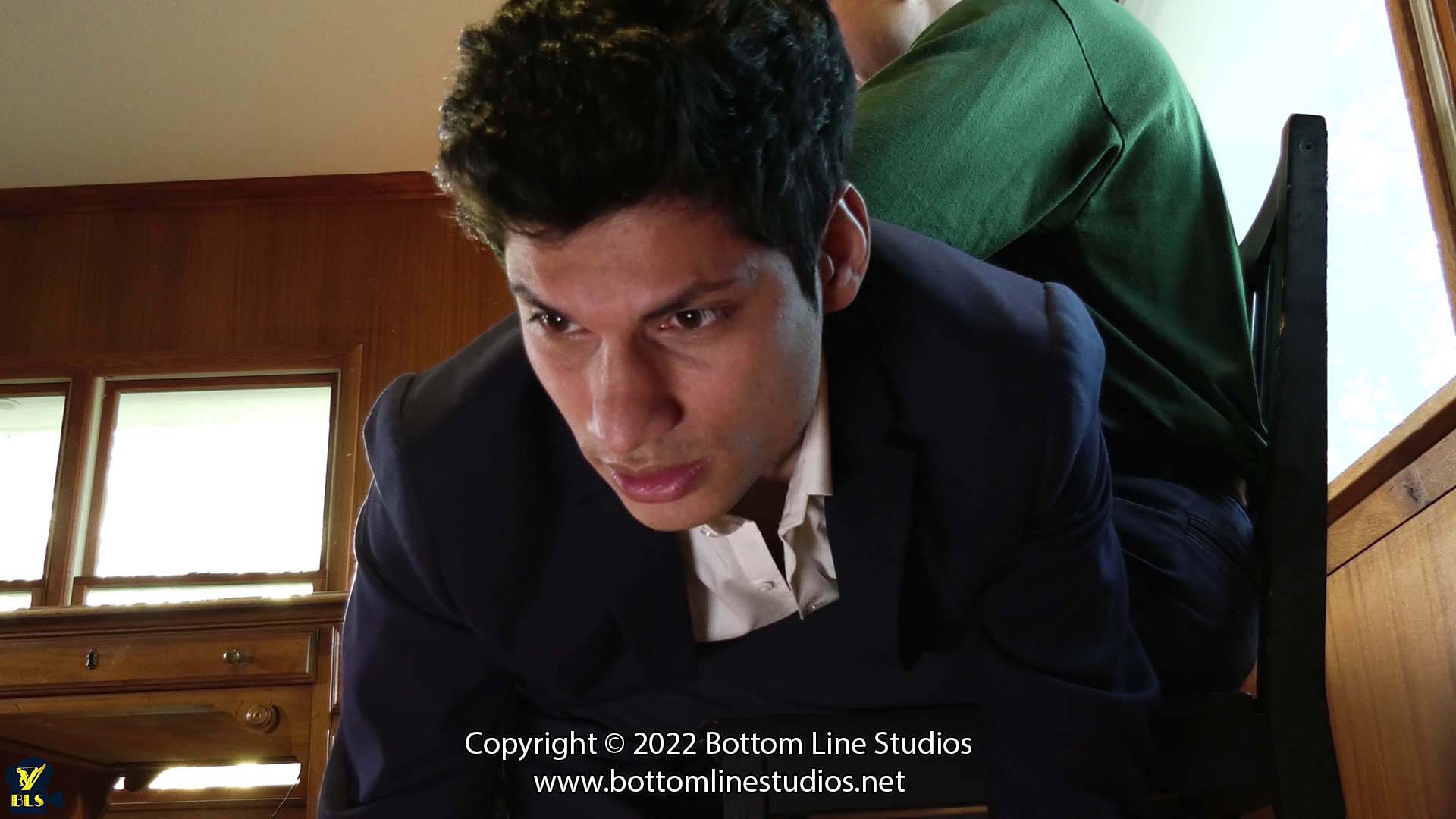 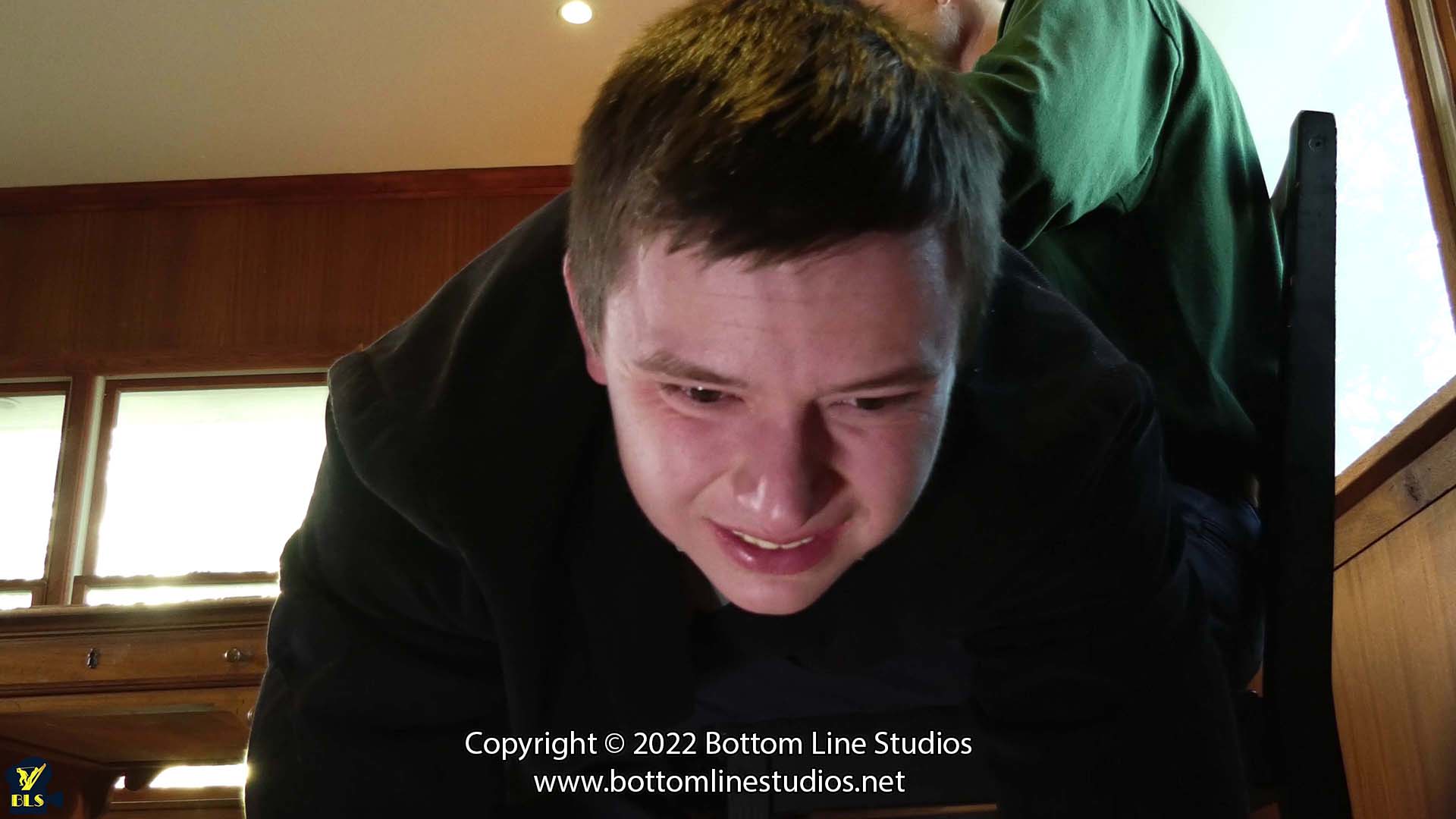 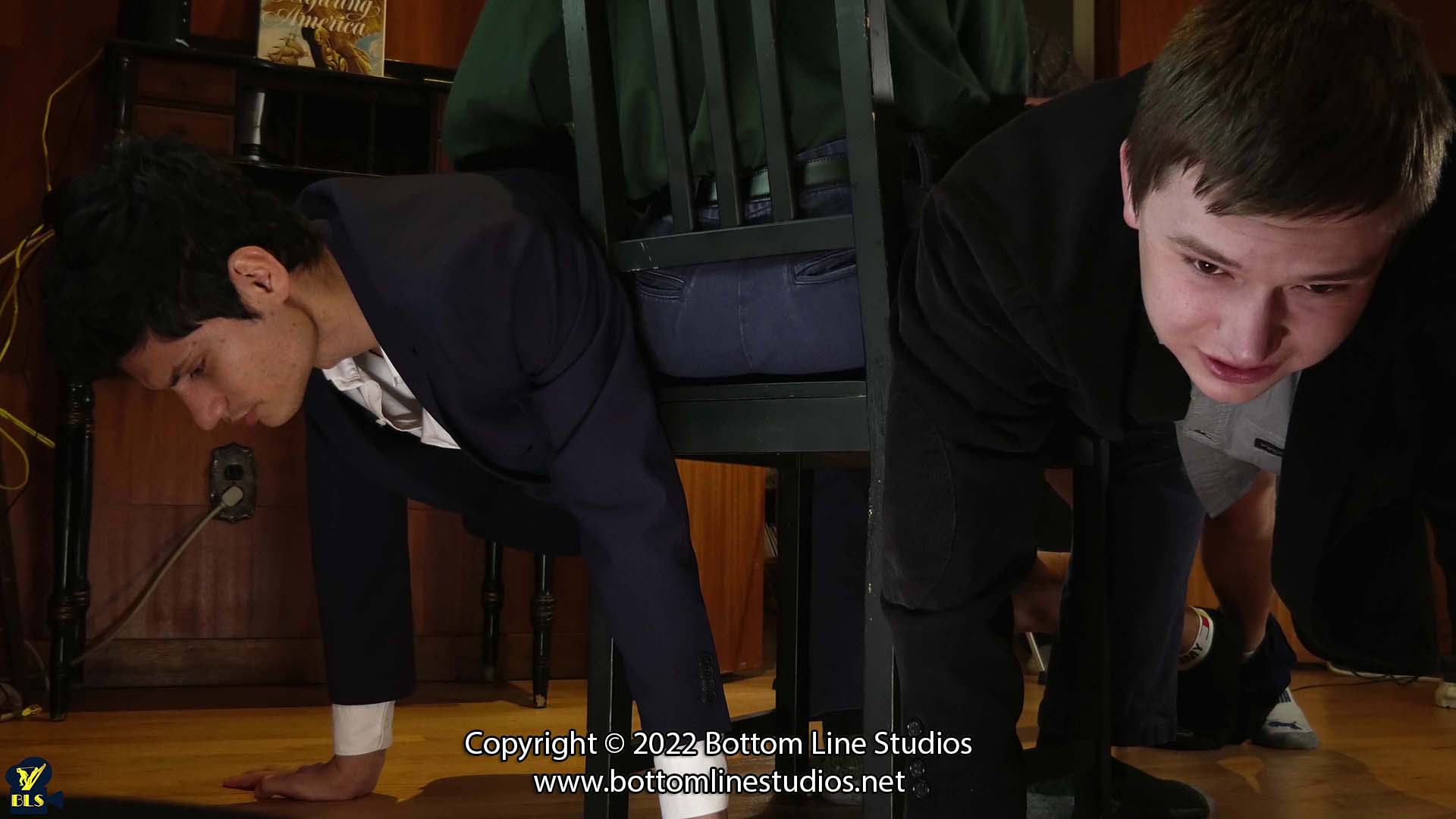 Normally one should disapprove of Alex suffering the same spanking (even if still somewhat sissy-soft) as his partner in lazy crime, who lied (albeit for both of them) and (as Latino-hot-tempered Hispanic hottie) used the banned (why, really?, but(t) rules are CP-enforceable rules) F-word, hence apparently earned elaborate extras, but(t) in this case Diego can be forgiven for feeling (wisely silently, backtalk being extremely spankable; only that grey zone with excuses proves puerile-posterior-punitive quicksand, about every time a knave in impending thrashable trouble opens his big mouth for more than ‘Yessir’ or ‘Sorry, Sir’) it should rather be the other way around.
After all, it’s Alex who forgot to call off his appointment with personal buddy Diego, whom he was to show around boarding school before a meeting with suddenly-sick headmaster about a prospective exchange program with Diego’s, and incurred detention for not reporting for his regular team practice from coach, who found out when Diego arrived and decided neither knave should remain unsupervised, so sentenced innocent Diego, who already fairly fears a fiery frockless flogging for returning to his school without any meeting result (equalled with truancy, doubled for not catching the first train back), to wait for the next train back in chores detention with Alex, who hoped to get away with utter loitering if his ill-inspired guest uttered some lame excuses.
As a matter of fairness, when headmaster returns and finds out, he phones his counterpart, who clemently grants Diego a two floggable demerits dispensation (albeit during a pointless BA OTK-hand-spanking lecture, still smarting soundly on sore-struck scarlet stripes, so the shapely stripling still won’t quite get away with any spankable knavery), next day summons coach and Alex, to suffer first the same sissy OTK spanking session as they dragged Diego into, then has them stripped over the couch-back for the three-tail-tawse his counterpart sends, the very one used on innocent Diego, whose school tries out -at least while waiting for a fresh, even heavier Lochgelly from Scotland- the willow, hickory, hazel and species-true birches Sir sent as return gift.
So both schools’ abject-adolescent-ass-arse-agony-arsenals end-up excellently enriched by CP-cultural exchange, and all knaves -the new implements being introduced to each scared-stiff-shivering-and-shuffling student’s ‘verge-virgin’ bare bottom, lining-up all-on-ankles for double dozens in special extra general assemblies- plus coach duly up-ended, eerily exposed for extra-curricular educational endurance: mission accomplished after all, as all’s well that ends well-upended.
Yet this isn’t quite the end of ensuing upendings, as a make-up appointment is set up, with Alex in attendance as assistant prop, to demonstrate on his abject ass-arse a long list from his headmaster of standard CP-tariff spankings for various offenses, each followed by the equivalent in Alex’s school, drafting a list which are recommended for best posterior-punitive-practices exchange, after a return visit to Alex’s headmaster, now with each knave as brat-butt-bared demo-victim for the other’s school version followed by his own, and comparing the other headmaster’s nearly-identical list of preferences, so next term starts with general assemblies to demonstrate the amended school CP codes as above, as all school terms will from now on.