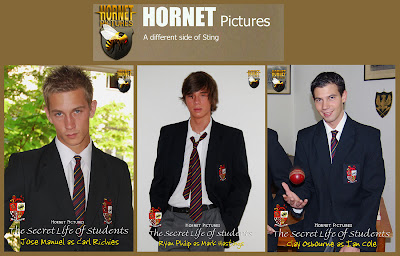 The first movie by Hornet Pictures, a new venture by Sting pictures is “The Secrets of College Life” and will be released shortly.

Here is a press release from Sting regarding Hornet Pictures

The Secrets of College Life is the first vanilla adult feature from STG Pictures new studio Hornet Pictures. After more than eighteen years making fetish films with Sting Pictures this twice award nominated studio has decided to venture in to another area.

Michael Steele the producer has worked hard to produce a new sense of realism to the stories with careful planning in regard to both cast, costumes and location. The film’s director Richard O’Shea says that after reviewing many of the current gay adult titles everything seemed to be the same it was becoming harder to differentiate one European studio from another. As a mainstream drama film director O’Shea wanted to bring out and elevate a better sense of characterisation, get to know the boys more, really want to know the boys more and then see them in some hot action sequences. Coupled with this try to use realistic sets and not just another back street lounge sofa as the main prop. O’Shea also states that he cannot see why porn films shouldn’t adopt some of the storytelling abilities of their mainstream cinema counterparts. Although budgets are always tight it must be possible to give adult films a more appealing and cinematic feel even before the cast begin to bang the hell out of each other. Rob Lyman the films executive producer has certainly stretched the finances to produce that desired cinematic effect.

Although The secret life of Students includes a caning scene (images from which will be posted here shortly) the majority of the content is non-spanking and therefore off topic,

📂This entry was posted in Hornet Pictures Sting